Our fun-loving friends, the North Koreans, have never let silly things like the laws of physics get in the way of their grand aspirations.  Even faced with setback after setback, the sunny North Koreans are ever optimistic.  After last April's abysmal rocket failure, the latest Dear Leader Kim Jong-un was unfazed and went to atomic warhead delivery system Option 2 shown below:

Of course this presupposes that a North Korean atomic device will even detonate.  We have all seen this atomic test video smuggled out of North Korea by NBC operatives:


One wonders how a country that spends so much time and so many resources on their military can struggle so consistently to develop a simple atomic bomb and a way to share it with their South Korean cousins.  I mean come on, if the Pakistanis can do it, how hard can it be????

Well, after reading North Korean Vice Foreign Minister Pak Kil Yon's comments to the UN, I think I have it figured out.  This quote explained it all:


"Today, due to the continued U.S. hostile policy towards the DPRK," Pak said, "the vicious cycle of confrontation and aggravation of tension is an ongoing phenomenon on the Korean peninsula, which has become the world's most dangerous hotspot where a spark of fire could set off a thermonuclear war."

The North Koreans have stolen the wrong sets of plans!  They stole them from Wile E. Coyote, Super Genius: 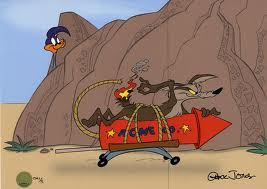 I'm no nuclear physicist, but even I know that you don't use a match to set off a thermonuclear bomb.
Posted by Sahib at 9:59 AM