Can A (Muslim) Brother Get An Amen? 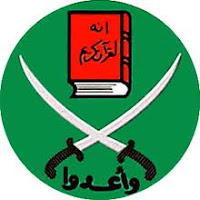 Every day I learn more and more about the religion of peace. Take for instance the word Amen.  Usually pronounced "ah-meen" by Muslims, it can be used in Islam in much the same way as it is in Christianity and Judaism, as an ending to a "supplication to God" or prayer.  Huh.  Did not know that.

I learned this little tidbit when I became aware of a video coming out of Egypt.  The clip shows Muslim Brotherhood Puppet, er...Egyptian President, Mohammed Morsi during last Friday's prayers at a mosque in Marsa Matruh. Traditionally, the congregation ends the imam's recitation of a list of prayers by saying "ah-meen", which Morsi clearly does on the video.  It's all quite lovely and spiritual.  I thought I'd dig a little deeper, and find out just what the imam was praying for.  Surely it was for peace in the Middle East, respect and honor for women, equality and dignity for all....... um, not exactly.

Included in the imam's prayerful to-do list was the following.....

"Destroy the Jews and their supporters and disperse them, rend them asunder"

Isn't that lovely?  Can you imagine the widespread outrage in the United States if the President was a follower of a religious leader who called on followers to "rend asunder" the Jews?  A religious leader who condemned nations, encouraged violence, and espoused hatred?  Yeah, me neither.