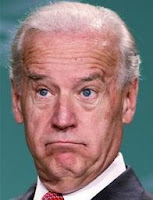 Vice-President (and great friend of SACSTW) Joe Biden really threw the bit today at a campaign stop in North Carolina.  In what can only be called a remarkable moment of lucidity, Dear Leader's running mate said this about his boss's term in office while commenting on Republican tax policy....

Now of course Republicans don't want to raise taxes on ANYONE, let alone the middle class.  It is Democratic refusal to extend the current tax rates that will result in a middle tax class hike.

What's more interesting is Joey's admission that under Barack Obama's leadership, the middle class has been "buried" the last four years.  I am delighted to completely agree with that characterization.  The failed presidency of Barack Obama has indeed buried the middle class, and it is now time for Joe and Dear Leader to quit throwing dirt on us.  Put the shovel down Joe, and back away slowly.

Most folks are calling Biden's comment a "gaffe".  I'm sure Dear Leader is calling it something else tonight.  Myself, I prefer to think of it as an all too rare dose of honesty from a member of the administration.  Too bad he isn't smart enough to realize what he said.