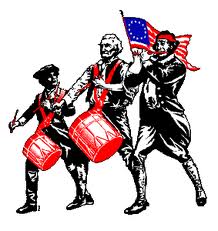 I know all these days of celebration can get confusing, what with Dear Leader issuing a Presidental Proclamation that 2 days ago was National Equal Pay Day, Dyngus Day was this month, National Talk Like A Pirate Day coming up in September, AARRGGHHH!

Long-time readers know that I am a Founding Father aficionado.  We have talked about overlooked dates in our history before, read about Constitution Day here.  Today, April 19, is another such date.  It is known as Patriot's Day, not to be confused with the designation of September 11 as Patriot Day.  Patriot's Day marks the 237th anniversary of the Battles of Lexington and Concord, the initial engagements of the American Revolution. 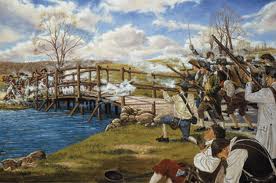 On April 19th, 1775, Emerson's "shot heard round the world" was fired at the Old North Bridge,   This was the first outbreak of open military conflict between Great Britain and the colonists.  It was the moment of conception for this great American experiment that President Obama is trying so hard to abort.

The commander of the milita at Lexington, Captain John Parker, had this to say when British troops were sighted... "Don't fire unless fired upon, but if they want a war let it begin here".  And begin there it did.

Imagine the fears, passions, and spirit  those revolutionaries carried in their souls during the long, bloody war for independence.  None of them asked to become Founding Fathers of a new nation.  They were "just" men of honor, achievement, and principle, who found themselves and their communities suffering intolerably from the oppression of a central government.  They came together, defeated the most powerful nation on the planet, and established a republic that became mankind's greatest hope.

They knew what Edmund Burke knew...."All that is necessary for evil to triumph is for good men to do nothing".  Instead of doing nothing, they acted, and the bell of freedom begin to ring.

This Patriot is ashamed at what we have allowed our country to become.  I wonder how it all happened, but I bet Edmund Burke knows.  Mostly I wonder this.... When and where will the NEXT "shot heard round the world" be fired?