How About Some Civil Disobedience from the Right? 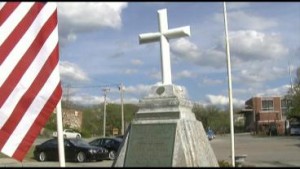 Apparently some atheist group has their wee-wee all warm over a cross in a fire department parking lot that has been there for 91 years.  It is a memorial to World War I veterans in Woonsocket, Rhode Island.  The Wisconsin-based Freedom From Religion Foundation-FFRF (pronounced firf) has written a letter to the mayor of Woonsocket, Leo Fontaine, demanding its removal. To mayor Fontaine's credit, he stated:  “I have no intention of removing the cross under any circumstances.”


The problem is that the town of Woonsocket, like many other town's, is having financial difficulties and cannot afford to fight Firf in court.  I have a suggestion for Mayor Fontaine.  Civil disobedience.  I mean liberals are all about civil disobedience, right?  Obama, Pelosi, Holder, Ellen Barkin, et. al. are all for the OWS protesters camping, crapping, and disrupting people wherever the feel like it, so I'm sure that they would support a little town's fight to keep their 91 year old memorial.  Right?


Here is a letter of response I would write to Rebecca Market, senior staff attorney for Firf.  Mayor Fontaine is more than welcome to use the entire letter or any parts of it he wishes.  I would feel honored if he did.

Thank you so much for your inquiry about our memorial honoring our fallen veterans of World War I.  We respectfully decline your request.  While we are glad the people of Wisconsin have taken interest in our town, we intend to decide on these matters for ourselves.

Your dubious understanding of the establishment clause of the first amendment to the constitution aside, we discourage you from making this a legal matter. It would be a waste of time and money on your part.  We will not spend one dollar of town funds nor one minute of anyone's time addressing this matter in court.  It will make no difference.  We are neither moving or removing the memorial from where it currently resides.

Any attempt by outsiders to molest the memorial will be vehemently rebuffed.  I have authorized a permanent protest permit for the area immediately surrounding the memorial.  Local 2nd amendment protesters will be campaigning for a new concealed carry law.  They will be protesting 24 hours a day.  Current town law states that citizens are allowed to carry loaded firearms, but they must be prominently displayed.  Any attempt to disrupt this protest would be seriously ill-advised.

Thank you again for your inquiry.  I consider this matter concluded. I will make no further responses regarding this issue.

As that I am not conversant in Rhode Island concealed carry laws, that part of the letter could require some editing, but I think it would make a good first draft.  I think Mayor Fontaine should tell Firf to stuff it.  The memorial stays and if it requires civil disobedience to keep it there, so be it.
Posted by Sahib at 12:15 PM