Hey Kid...There's No Crying In Baseball ! 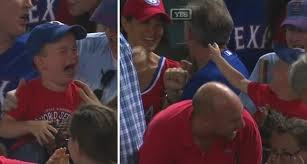 Now they've gone too far.  The left's entitlement virus has infected that great American cathedral....baseball.
Most of you probably know the story.  At Wednesday night's Yankees-Rangers game, Mitch Moreland of the Rangers tossed a baseball into the stands behind first base.  The ball was caught by Sean Leonard and his fiancee Shannon Moore.  A 3 year old child sitting adjacent to the couple immediately commenced caterwauling and screeching because he didn't get the ball.

Seemingly oblivious to the tyrannical toddler, the couple enjoyed their moment, with Leonard taking a photo of Moore holding the ball.  Unbeknownst to the couple, Yankees announcer Michael Kay was berating them on live TV for not giving the ball to the child.

America seems to agree with Mr. Kay, as everywhere you look online this week there are attacks on Moore and Leonard.  About the kindest thing I have seen them called is "the worst people ever".  Never fear Sean and Shannon, the Crew has got your back!

Moore and Leonard have demanded an apology from Kay and the YES network, and rightly so.  For those announcers to broadcast vicious personal attacks on the couple is reprehensible, and far worse than any violation of baseball fan etiquette Moore and Leonard may have committed.

Had they given the ball to the lachrymose laddie, the child would have had his sense of entitlement cemented for life.  We may have seen him next at age 18, squalling about how the American taxpayer needs to cough up the money for his college education.  Or maybe in front of Congress, begging for the government to buy his condoms.  Guess who agrees with me?  The kid's parents!  It turns out that Moore and Leonard offered the ball to the kid later in the game, and the parents declined.  They didn't want their son to think he could get anything he wants just by throwing a tantrum.  Bravo!

Unfortunately, the Rangers undermined this life lesson by tossing the kid another ball from the dugout, and reports are that the team is going to give the boy a signed team jersey.  Great.

One last bit of advice for the kid from this old baseball coach.....get better.  You were the only one in the vicinity of the ball wearing a baseball glove, and you couldn't make the play.  I know you are only 3 and all, but there are no excuses and no crying in baseball.  If you used the energy you spent on your tantrum working on your defense, that ball would be sitting on your bedside table right now.