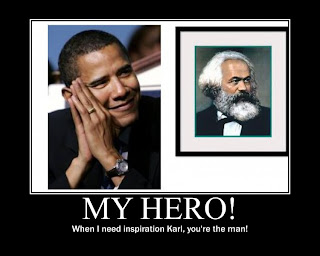 The Crew spent a relaxing weekend in the SACSTW secret Ozark compound.  As he opened his tackle box to do a little early morning fishing, he found a now-familiar envelope with a note attached.  The note said, "I hope you enjoy BHO's latest epistle to his role-model and hero, Karl Marx.  Dear Leader seems a little frazzled. Your friend, CT."  He transmitted the text to me through the SACSTW satellite up-link.  I hope you enjoy it as much as we did:

I'm at my wits end!  It's not my fault.  What's with the gag-order from above?  I'm just following the Saul Alinsky play-book as closely as I can.  I mean why are George and Warren insisting that I quit speaking in public?  They want to see more Joe Biden?  I realize they see him as assassination insurance.  Holder put it best when he said, "Joe Biden can stop a bullet from leaving the barrel of a gun just by opening his mouth.  Joe's lunacy is more protection than three inches of Kevlar."  But why do they want me to stop speaking from the heart?  There's no way that Mittens can beat me.

So what if I called to commiserate with Sandra Fluke but not Bridget Palin?  Who cares that I said my beloved fictitious son looks just like Trayvon Martin and ignored my other fictitious sons when they set fire to a young boy in KCMO.  (Heh, pulled some strings and you can't even find the story on the Kansas City Star's website anymore.)  What difference does it make if I tell the Supreme Court to back off and keep its mitts off my healthcare power grab?  People want me to take care of them.

Like I told my old buddy Meddy, once I've finished off Mittens this fall, I'll have more "flexibility".  That was pretty smooth of me.  A couple more like-minded justices and I won't have to worry about that pesky "constitution" interfering with my plans to fundamentally transform America.

Hey!  There's Stanley, my unicorn, here for our evening ride on the south lawn.  He shows up now even without those wonderful shots they used to give me.  They do insist that I eat my pudding however...  Oh well Karl, thanks for listening.  Gotta fly!


Just like in Sahib Jr.'s backpack, The Crew found gum drops next to the letter in his tackle box.  Hmmm....