Obama vs the U.S. Constitution-Let's Get Ready to Rumble!

Ladies and Gentlemen...... Welcome to the century's main event!  A bout for the future of the United States, liberty for people across the globe, and the very notion of individual freedoms!

First the challenger, fighting out of the blue corner, straight from the Chicago political machine, trained by Jeremiah Wright and Bill Ayers, fighting for statism and governmental intrusion, here is Barack Hussein Obama! 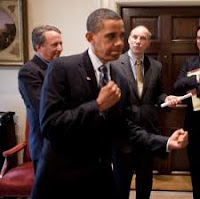 And in the red, white, and blue corner, born in Philadelphia, PA, trained by Washington, Madison, and Jefferson, fighting for individual liberty, 224 years old and STILL Champion of the World.... the Constitution of the United States!

Ding Ding Ding Ding
Round 1- Religious Liberty
Obama threw a flurry of jabs in Round One, using the Equal Employment Opportunity Commission and a lawsuit by Cheryl Perich claiming the Hosanna-Tabor Evangelical Lutheran Church and School in Michigan violated the Americans with Disabilities Act by firing her.  Perich, a "called teacher" and commissioned minister within the church, taught secular and religious classes, as well as leading chapel service.
Perich took a disability leave in 2004, after being diagnosed with ........narcolepsy.  The church refused to hire her back after her leave, and in the fine tradition of liberal pantywaists everywhere, she sued.  The case went all the way to the Supreme Court, where our champion knocked Obama to the canvas with a unanimous SCOTUS ruling in favor of the church.  Confirming that churches have the right to a "ministerial exception" to anti-discrimination laws, Chief Justice Roberts said this:
The interest of society in the enforcement of employment discrimination statues is undoubtedly important, but so too is the interest of religious groups in choosing who will preach their beliefs, teach their faith, and carry out their mission.
Click here for Peter Johnson Jr's excellent commentary on Round One
Check back tomorrow for blow by blow accounts of Round Two- Recess Appointments!
Posted by the Crew at 8:08 AM