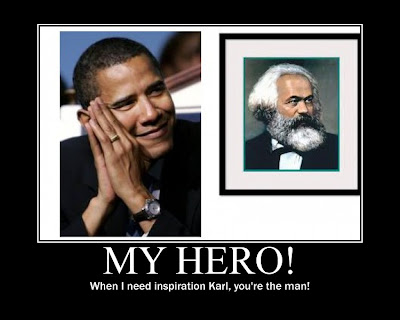 As the Crew and I were leaving the SACSTW secret underground command bunker one recent afternoon, we heard a slight scuffling noise behind us.  With cat-like reflexes we spun and drew down on a shadowy figure lingering behind a tree.  In an obviously digitally altered voice he/she said, “You have nothing to fear from me.  In fact, I have something that might interest you greatly.”  At this point, the figure tossed a bundle of what appeared to be papers at our feet.  “What’s that?”  The Crew Asked.  “Letters.  Letters from Obama to his hero” the figure replied.  “Who’s his hero?” I asked.  “Just read the letters.  They explain everything.”  As the figure disappeared in the fog I yelled after him/her, “Who are you?”  The figure replied, “Just call me… Cavernous Trachea” and he/she was gone.

The Crew and I quickly repaired to the command center to read the letters.  This is the first one:

“Dear Karl,
I don’t know why I’m writing you.  This seems silly.  The doctors are totally over-reacting to my little ‘episode’.  I mean everybody needs to blow off steam once in a while right?  Running naked though the West Wing screaming, “Spiders!  Spiders are eating my brain!” was just my way of blowing off steam.  And I really wasn’t going to impale Joe Biden on that fireplace poker.  I was just messing with him.  Nobody can take a joke around here.

So I guess writing you is supposed to be a more ‘reasonable’ way to deal with my frustrations.  They told me to write a letter to my biggest hero and most influential person in my life.  You were my first and only choice.  So Karl, help me out here.  Everyone’s against me.  Moochelle (she almost caught me calling her that) has been on a spending spree that would make Paris Hilton jealous, Reggie abandoned me, the republicans are catching on to my tricks, and I think my new Mao Zedong tat is infected.  I can’t put any weight on my left cheek at all.  Everyone around me is bummed too.  Even my best buddy, Mr. Teleprompter, is off his game.  Last week in my state of the union address, he just kept repeating the same exact lines from his…  I mean my old speeches.  And the worst thing… no one in my entire administration can think of a  single new euphemism for taxes.  We’ve used them all up.  Darn that vast right-wing conspiracy for trying to wake the chumps… I mean people, up.

You know what Karl?  I think the doctors were right.  I do feel better!  I’m sure it has nothing to do with that shot they gave me about 20 minutes ago.  They told me it was just a B12 booster for energy.  Oh well, I better go. Stanley, my pet unicorn, just came into my bedroom.  It’s time for our ride on the South Lawn.
I’ll write you again soon!

After reading the letter, The Crew and I went outside to where we had seen the shadowy figure to look for clues as to his/her identity.  The leaves and brush were disturbed where the figure had been standing, but we saw nothing else.  As we were walking away, The Crew exclaimed, “Hey!  What’s that?”  He picked up what looked like piece of scrap paper.  On closer inspection we discovered it was a receipt:

*Editor's note:  Another great idea brought to you by SACSTW creative consultant Brian Holyfield - @Holyfield67
Posted by Sahib at 7:46 AM