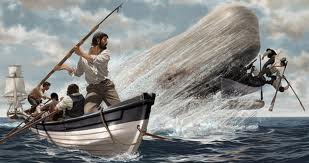 Like Melville's Ahab, Bill O'Reilly buried a harpoon deep in the bloated belly of southern Democrats on his show that aired on Martin Luther King Day this week.  As veteran SACSTW readers know, one of our favorite themes is skewering the hypocrisy of the left, and it has never been done better than Officer O'Reilly did on Monday evening.

Let's set the stage.  As we all know, the GOP held a debate in South Carolina on MLK day.  This caused great offense and consternation to Dick Harpootlian, the chairman of the South Carolina state Democratic Party.  If the name sounds familiar, he is the guy who made these reasoned and thoughtful comments about the GOP primary season on Megan Kelly's show:

So, the chairman of the state Democratic Party of South Carolina isn't worried about offending vertically challenged voters because  "I don't think they can reach the machine....".  You know, the sensitivity and compassion of the left is striking.  But I digress.

On Monday, Harpootlian made it clear that he thought by holding a debate on MLK day, the GOP was ignoring Dr. King's birthday, and showing its racism and disregard for the black voters in South Carolina.  Officer O'Reilly asked (rather gently I might add) Moby Dick if he knew what happened on MLK day in 2008.  After much stammering and dodging, Harpootlian grudgingly admitted that the Democratic Party held a Presidential debate on MLK day in 2008, sponsored by the Congressional Black Caucus.  So, to review,
Democrats debating on MLK day GOOD, Republicans debating on MLK day RACIST and OFFENSIVE.

As I have mentioned before (referring to Mitt Romney in fact), the best way to evaulate these talking heads is to look for those little moments when they drop their guard (although I'm not sure Harpootlian has one) and say something that illuminates the dark recesses of their core philosophy.  Harpootlian did just that when his conversation with O'Reilly turned to the presidential election of 1860.  Incredibly, Moby Dick said that GOP candidates Rick Santorum and Newt Gingrich were injecting race into the 2012 election by referring to it as "the most important election since 1860".

What happened in the presidential election of 1860?  Americans elected a Republican President who guided the nation through its most turbulent years, preserved the United States for future generations, and oh yeah, freed millions of blacks from the chains of slavery.  Those are plain, simple facts that can not be disputed by anyone.  Harpootlian's comment on the election of 1860...."We in the South have a little different version of what happened in 1860".  Wow, even for the jaded and cynical Crew it was hard to believe he admitted that.
Behind those words lurks the dark and twisted soul of the Democrat Party.

I'm guessing that the South Carolina Democratic Party Chairman's "version" of what happened in 1860 goes something like this:


That damn cracker Lincoln came in and stole the election away from mah man John Breckinridge!  Then he told us God-fearin Southerners that we couldn't keep those blacks (probably not the word he was thinking) in our fields anymore, and we ended up having to pick our own damn cotton!
Here is the video from the O'Reilly factor- see for yourself what the Democrat Party of South Carolina thinks: