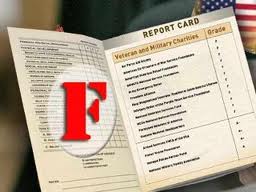 This morning I am giving serious thought to the sorry state of education in the United States, as evidenced by Barack Hussein Obama.  Seriously folks, let's take a quick look at Dear Leader's class schedule, and see if he can pass any of the basics.....

Most Obama sources agree that Barack Sr. was born in June of 1936.  Somehow he managed to serve in World War 2, even though it ended when he was 9 years old.  Hmmmm.  He must have been part of the vaunted Kenyan Kiddie Korps that helped sweep Rommel from the continent.

F
Come to think of it, let's give Barry another F for math class with this one.

One final multiple choice question class.......Based on what we have learned from Barack Obama's report card, choose the one that best applies