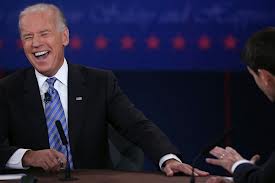 So I sit down at my keyboard this morning to pound out some debate analysis.  I even got a draft done, full of SACSTW's usual snark and sarcasm.  Then I read something that Jill Miller, one of our great readers and frequent commenters, had written.  I was struck by Jill's insight into the mindset of the left, and immediately chucked my draft into the recycle bin.  Jill graciously gave me permission to share her brilliant analysis with the entire SACSTW community.  Enjoy.........


The Obama campaign was deeply rattled by the President's dismal performance in last week's debate.  The Dem assessment:  the President was too polite, not forceful enough, and allowed Romney to take command of the stage.  The plan: don't let that ever. happen. again.  [Note: they are always about style, not substance. Facts are subservient to The Narrative and The Intentions.]

The solution? Let Biden be Biden.  Bluster, filibuster, and wear his heart on his big veneered teeth sleeve.  Manners be ding-danged: interrupt whenever you can.  Plow over the top of whatever Ryan is trying to say, whether with physical reactions or a torrent of words.  Say something - anything - and put the LIberal Create-A-Fact (TM) stamp of approval on it: "and that. is. a. FACT!"(TM)

It appears to have worked on the liberal base, who think Joe won because he was more forceful and passionate.  This makes sense to them because, to the postmodern liberal, facts and outcomes are trumped by feelings and intentions.  But there remains a huge swath of people in this country who are in the middle - not devoutly conservative, yet not postmodern liberal either - and they were really put off by Biden's demeanor.  It's one thing for the guy on the street to bluster and wave his arms and laugh at his opponenet.  It's quite another for the guy who is one heartbeat away from the Oval Office to do it, particularly when he is the older, mature, experienced on doing it to a younger man.

The two political sides in this nation are deeply divided and you can get a good glimpse of the nature of that divide in the reaction to the debate.

Conservatives see truth as objective and external, unchanged by point of view.  We value manners and ethics that calmly display an understanding of facts, and we value outcomes that produce a measurable result.

Libs see truth as subjective and internal, varying with circumstance and situation.  They value emotion and "the heart", and judge by intentions rather than outcomes.

There you have it folks.  Simply the best, most incisive analysis of last night's debate that you will find anywhere, by anyone.  Thanks again to Jill for allowing us to share her wisdom with everyone.

~Awesome job Jill!  Great analysis.  Thanks for letting us post this.  *Sahib
Posted by the Crew at 12:11 PM