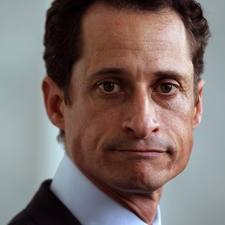 When last we saw disgraced Democrat and former Congressman Anthony Weiner, he was taking snapshots of Little Tony and firing them around cyberspace like an oversexed teenager.  At least he owned up to it like a man, albeit after a week or two of baldfaced lying about his transgressions.

Now, after being left hanging in the Obama job market for a year, Weiner has decided to get back into the only real career suitable for a man of his dubious character and unsavory integrity......politics.  Never one to shrink from a challenge, Weiner is expected to make a run at replacing Michael Bloomberg as mayor of New York City.

We know that Bloomberg has banned trans fats, large sodas, and other serious threats to our way of life during his time at the helm of NYC.  The soul trembles at visions of what a Mayor Weiner might decide to jerk away from the good people of Gotham.  Tighty whiteys, laptop computers, bicycle seats, and dozens of other popular products could be in peril!  The good news is that Weiner has already asked the FDA for special dispensation to sell Viagra over the counter within the boundaries of NYC should he be elected.

Like most political animals, for Weiner it all boils down to money.  He is sitting on a 4.5 million dollar war chest of campaign funds that he will have to return to his donors if he doesn't run.  Frankly I'm surprised we haven't seen pictures of the Little Mayor surrounded by all that cash floating around the internet yet.

If the voters of NYC decide to yank Weiner out of political exile, they deserve what they will undoubtedly get.  He'll be just the latest member of the "NYC Mayors Who Can't Measure Up To Giuliani" club.