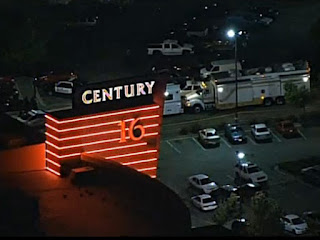 In the wake of the Colorado theater shooting yesterday, there has been much analysis of motive, opportunity, pyschological make-up of the shooter, etc.  I will leave such topics to those more knowledgeable about them than I.  I'd like to talk about the Second Amendment, the value of concealed carry, and our inalienable right to self-defense.

The legal carry of concealed firearms is prohibited in Theater 9, as it is in all theaters operated by Cinemark.  It is known as a "gun-free zone".  I prefer the term "target-rich environment".   Cinemark has the absolute right to have this policy as a private business, but I believe that it may have cost some patrons their lives early Friday morning.

There has been much discussion on a concealed carry forum that I frequent about this issue.  Some very knowledgeable and experienced folks there believe that even if 1 or more people in that theater had been legally carrying a firearm, stopping the shooter would have been a monumental task.  I agree.  His body armor, the darkness, smoke, and resulting chaos all combined to make for a very difficult defense scenario.  There was however, a short period of time when the shooter first entered the theater that most of the patrons believed it to be some sort of prank.  An armed and alert citizen with good situational awareness had the chance to confront the shooter and possibly avert disaster.

Criminals are cowards, and James Holmes**  is no exception.  As meticulous as he apparently was in planning his crime, there's a reason he didn't go to an Aurora gun shop to commit multiple murder. As with all cowards, he took the path of least resistance, choosing a venue packed with people unable to defend themselves.  I believe that had an armed citizen returned fire on Mr. Holmes, his resolve would have evaporated like a drop of water in the Kansas City sun.  Lives would have been saved.

Is it a sure thing that an armed citizen could have stopped the violence?  Of course not.  Maybe the chances would have been small, 10%, 20%, I don't know.  What I do know is that a theater full of unarmed people had 0% chance of protecting themselves and their loved ones.  12 dead and 58 wounded was the result.

Remember, reports indicate that law enforcement arrived on the scene within 60-90 seconds.  They performed brilliantly, with courage and alacrity.  And still 12 people died.  If you are confronted with a violent criminal in your neighborhood today, do you think the police will arrive in 60 seconds?  If you do, I hope you have your affairs in order.
Posted by the Crew at 11:34 AM