Devoted readers of SACSTW know I have tired of people comparing people they don't like to Nazis, but this group has been the target of my ire for years.  Nanny Bloomberg whose central theme in life is that he knows better than you and will use his power in any way he can to coerce or force you to conform to behavior HE feels is best for you, has decided that all women should breast feed their babies. 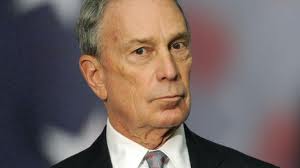 Now he hasn't gone so far as to outlaw baby formula (unless it's a bottle over 16 ounces), but he wants to impose more stringent controls in NYC hospitals for baby formula than they have for Oxycontin.  According to a New York Post article:

"Starting Sept. 3, the city will keep tabs on the number of bottles that participating hospitals stock and use — the most restrictive pro-breast-milk program in the nation. Under the city Health Department’s voluntary Latch On NYC initiative, 27 of the city’s 40 hospitals have also agreed to give up swag bags sporting formula-company logos, toss out formula-branded tchotchkes like lanyards and mugs, and document a medical reason for every bottle that a newborn receives."

Now I understand there are benefits to breast feeding, but it is not for everyone.  Some people however, do not agree:


“It’s the patient’s choice,” said Allison Walsh, of Beth Israel Medical Center. “But it’s our job to educate them on the best option.”

That sounds reasonable.  They just want to "educate" the stupid women who do not want to breast feed. Right?

"With each bottle a mother requests and receives, she’ll also get a talking-to. Staffers will explain why she should offer the breast instead."

Read that quote again.  "With each bottle a mother requests"  Say a mom and her new baby stay a day and a half in the hospital.  That's 36 hours.  Say the baby is fed every 2.5 hours.  That translates into 14 "educational" sessions for a new mother who has just given birth.  That's not education.  That's harassment.


A woman I know tried and had difficulty breast feeding her first child and decided to use formula instead.  The breast feeding "educators" or as I call them Nazis made her feel like a child abuser and unfit mother.  When her second child was born, the husband let the nurses know in no uncertain terms were these "educators" to go near his wife.


This was an intelligent woman who knew the potential benefits of breast feeding, but made an educated decision to feed her children formula.  She's the mother and it was her choice.  Now some women may not know about the potential benefits of breast feeding, so educating them is not a bad thing.  Harassing a woman who has made an educated decision to not breast feed IS A BAD THING!


Besides, I thought that it was a woman's right to choose what to do with her body.  Right?  I guess that just applies for abortions.