NAACP To Members- You Can't Handle The Truth! 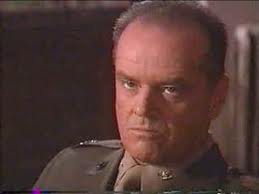 Geez, who knew that the NAACP convention was so much fun?  I may just have to take a week off and cover it in person next year!  After all, what could be more entertaining than watching tyrannical black statists like Emanuel Cleaver and Hilary Shelton demean and deride the black electorate?  In fine Colonel Jessup fashion, Cleaver, Shelton, and others have in essence said that NAACP members are too dim-witted to be treated with respect and honesty by Mitt Romney.

When Romney addressed the NAACP convention (something our black President hasn't done since 2009) this week, he delivered the same campaign speech he does at virtually every other campaign stop.  He did so  without regard to his audience's color or political leanings.  In other words, he didn't treat the NAACP audience any differently than when he spoke at the latest WHAMO conference.  He treated the NAACP with honesty and respect by laying out his plans should he be elected President, including repealing Obamacare.

That didn't go over well with Cleaver and Shelton (NAACP Washington Bureau Director and Senior Vice-President).  Because Romney didn't "speak to his audience", the NAACP bigwigs have accused him of racism and worse.  Sorry Hilary, but"speaking to your audience" is all well and good if you are doing a career day at the local elementary school, but if a presidential candidate does it to an audience of adults it is called pandering.

During his speech, Romney stated his desire to overturn Obamacare, help bring down the 14.4 % unemployment rate among blacks, and improve education for all Americans.

Here is what Cleaver and Shelton would have you believe Romney actually meant.....


"Alright you lazy shiftless homeboys, time for you to put the crack pipe down, stop banging every sister in sight, get off the couch and get a job"

Even more despicable, some (including the ever lucid Nancy Pelosi)  have suggested that Romney intentionally elicited the boos from the NAACP in order to rile up the racist crackers that are the conservative electorate.  Last night, Bill O'Reilly gave Hilary Shelton the chance to distance the NAACP from such bizarre accusations, but he demurred.  The subsequent interview was Bill O'Reilly at his finest, and a truly frightening look into the mind of the progressive black establishment.