Think of the Puppies and Kittens...NOT! 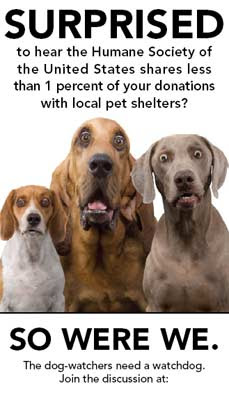 The Crew and myself are big animal lovers.  We both entered college with plans to become veterinarians.  We both are interested in wildlife and domestic animal issues.  We are both charter members of PETA (People for the Eating of Tasty Animals).  That being said, the largest animal "protection" organization in the country is one of the biggest scams ever.  The Humane Society of the United States (HSUS) is nothing but a radical animal rights lobbying organization.  They do almost nothing for real animals and local animal shelters.  Don't believe me?  Check out the graphic below showing the amount of money that HSUS gave to local shelter according to their 2010 tax returns. Less than one-half of one percent of their annual budget went to support local shelters. 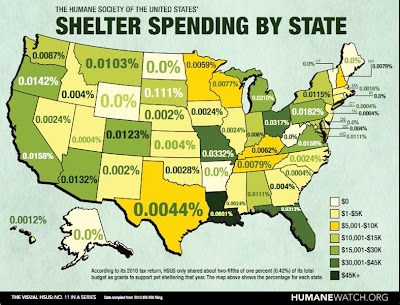 Well devoted readers, what goes around comes around.  According to a story from Jim Matthews, HSUS is going to get a taste of its own medicine:


"In a little-reported ruling by a judge in the District of Columbia earlier this month, the HSUS is going to court to face charges under RICO statues on racketeering, obstruction of justice, malicious prosecution and other charges for a lawsuit it brought and lost against Ringling Brothers Circus' parent company Feld Entertainment, Inc."

It is possible that this could bankrupt HSUS and potentially send some their top executives to prison. That seems about right for an organization that has fleeced countless good-hearted people who thought they were helping animals in local shelters.  The moral of this story is:  If you want to help local shelters, donate money directly to the shelter.