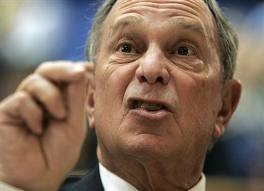 In the wake of the Aurora movie theater shooting, the anti-gun zealots are ramping up the attacks on the Second Amendment, and anyone who would dare want to protect themselves and their loved ones.

New York City Mayor Michael "Big Gulp" Bloomberg took the idiocy to stratospheric heights today on CNN with Piers Morgan.  Watch the video below, but for the love of Pete, sit down and stop eating before you watch..


There is so much inanity packed into those 90 seconds that I almost don't know where to start.  First we have Piers Morgan, with his vast knowledge of the American collective psyche, bemoaning the speed with which the American public "goes back to their normal lives" after a heinous crime like Aurora.  His knickers are in a knot because he just can't understand why we don't demand stricter gun-control laws.

Uh, Piers.  Here's why....we don't want stricter gun-control laws.  Stricter gun-control laws won't stop maniacs, and will only serve to make the job of self-defense harder for the typical American family.  Then there's this little thing called the United States Constitution.  Even a Tory like you should be able to get your cerebrum around "the right of the people to keep and bear arms shall not be infringed".


The ever cogent Mayor Bloomberg then looks Piers in the eye and says "I'll go one step further...".

Bloomberg thinks the solution to violent crime is for police officers across the country to "stand up collectively  and say we're going to go on strike, we're not going to protect you unless you, the public, through your legislature, do what's required to keep us safe".   For the mayor of our largest city to suggest that police officers walk off the job is unbelievably irresponsible.  Sadly, it probably doesn't even raise an eyebrow for long-time Bloomberg observers.

The real problem is very few people in our country really understand the job of a police department.  Police agencies ARE NOT tasked with protecting individual citizens.  Their responsibility is to enforce the laws of the community, investigate crimes, and locate/arrest violators.  Providing protection to each individual citizen is simply not in the job description.  You, and only you, can protect yourself and your loved ones.