Edict from the Soda Nazi: No Big Gulp for You! 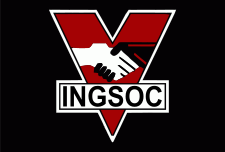 The Ministry of Plenty Department of Healthy Food Initiatives has decreed that the people of New York City are TOO FAT!  The Baron of New York, Michael Bloomberg, is tired of watching the gelatinous masses walk past the windows of his ivory tower.  Effective immediately, all sugary drinks exceeding 16 ounces are expressly VERBOTTEN!

The Baron has stated that since the proles... errr... people are too stupid to make the correct decisions concerning their dietary habits, he will mandate healthy habits for them.   He echoed earlier sentiments of Food Czar Sam Kass (formerly titled Sandwich Nazi, but they ran into copyright issues with Seinfeld), "The government must ensure that every little girl drinks, by force if necessary, beverages we deem to be nutritious regardless of parental wishes.  It is crucial that every little girl grows up healthy so that she can make the correct decision later in life to abort unwanted children because it is not the government's role to tell women what they should do with their bodies."

Failure to comply with this edict will result in $200 fines, compulsory invitation to one of Minister Holder's reeducation camps, and/or in extreme cases, season tickets to the New Jersey Nets.  The Baron also hinted at future edicts banning tobacco, alcohol, foods that fail to meet Muslim Halal standards, extreme sports, and  the viewing of Fox News.  As it is written, so mote it be.


Reminder:  We have always been at war with Eurasia


You can view the article that prompted this edict here.
Posted by Sahib at 9:54 AM