LA Sheriff's Dept.: Get a Tat? Get Suspended!

Only in the Peoples Republic of California 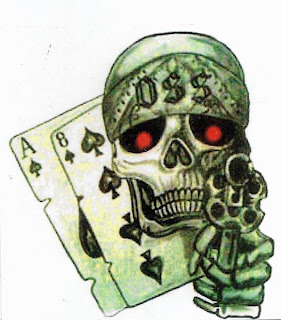 Anti-gang task force police officers in major metropolitan areas live harrowing lives.  According to the LA Times:  "The Gang Enforcement Team in Los Angeles is divided into two platoons of relatively autonomous deputies who target neighborhoods where gang violence is high, locate armed gang members and take their guns away."


Let me repeat that in case you missed it:  Locate armed gang members and take their guns away...


I'm sure this is a relatively simple task.  Undoubtedly, the officers go into the gang neighborhoods, ask the first passerby the location of the nearest gang clubhouse, knock on the clubhouse door, and the gang members meekly surrender their guns.


I guess with lives of such relative ease, it's only fair that several members of the Los Angeles Gang Enforcement Team are having to experience some minor difficulties.  Like getting suspended. According to a LA Times story, seven members of the team have been suspended for belonging to a clique called the Jump Out Boys and getting a tattoo of the image above.


"The design of the tattoo, confirmed by two sources, includes an oversize skull with a wide, toothy grimace and glowing red eyes. A bandanna wraps around the skull, imprinted with the letters "OSS" — representing Operation Safe Streets, the name of the larger unit that the Gang Enforcement Team is part of. A bony hand clasps a revolver. Investigators suspect that smoke is tattooed over the gun's barrel after a member is involved in a shooting."

After reading this, I thought:  "Oh my goodness!  Tattoos with a 'toothy grimace and glowing red eyes'! Los Angeles deputies must be running around shooting gang members willy-nilly."  Just after that thought, I read this quote:


"Sources say there is no evidence that deputies alleged to be in the clique have been involved in improper shootings or other misconduct. But the new revelations have heightened concerns."

WOW!  The LASD has some pretty rigid standards if "heightened concerns" are grounds for investigation and suspension.  I can hear the libs now, "But Sahib!  It is possible that they add smoke to the gun tattoo after a shooting!"

Really?  GOOD!  These guys have a crap job (conditions, not the job mission) and put their lives on the line every day.  If they want to create a support group and get matching tats, more power to them. The LASD brass would be far better served in finding ways to help and support them than looking for ways to punish them.

Good luck Jump Out Boys and watch your backs.  The gangs aren't the only ones after you.  You are in Sahib and The Crew's thoughts and prayers.
Posted by Sahib at 2:35 PM