Stop me if this starts to sound familiar..... The Republican Party nominates a man to run against Barack Obama for the Presidency of the United States.  Many conservatives within the GOP are unhappy, doubting the nominee's commitment to the conservative ideals of limited government, personal responsibility, and fiscal restraint.

In a futile attempt to head-off the left's race baiters, the nominee boldly declares that Jeremiah Wright, Obama's poisonous pastor of 20 years, should not be an issue in the campaign.  Indeed, the nominee pronounces his repudiation of those who would make Obama's decades long relationship with the anti-semitic, racist, and anti-American Wright a talking point on the campaign trail.

You remember that nominee right?  In case you have forgotten him, maybe this will remind you..... 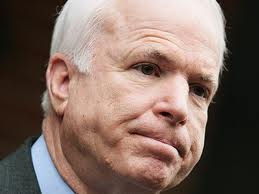 You know why you forgot him?   BECAUSE HE LOST!  He wasn't willing to do what it took to prevent an evil man from becoming President of the United States.  He wanted to take the high road, and allowed the left's predators to shred his Vice-Presidential pick in the most disgusting way.

Imagine my consternation when I heard Mittens spewing the same sort of holier-than-thou garbage yesterday.  In a flash, the answer came to me.....Romney had somehow breached security at SACSTW headquarters and hijacked our time machine.  Maybe he was trying to get back to those high school days and apologize to the kid who got the haircut.  Maybe he wanted to go back in time to get the dog out of that cartop carrier.   Regardless, he apparently only made it back to 2008.

In a flash I alerted Sahib to the intrusion, and we made our way to the SACSTW laboratory, dreading the loss of our prize time machine.  Relief flooded over us like the warm glow of fine bourbon as we saw the chronological conveyance secure in its garage bay.

With the time machine safe and sound, I wondered what could possibly explain Romney's following the same losing playbook as John McCain?  Then I remembered......he's the hand-picked candidate of the mainstream media....Doh!
Posted by the Crew at 7:08 AM