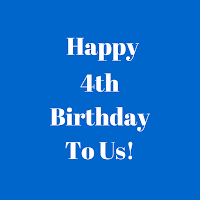 August of 2011 was dark and full of terrors.  With the 2012 Presidential campaign in full swing, the spectre of a second Obama term was looming over all of us.  I pitched the idea of a political commentary blog to Sahib, and SACSTW was born... four years ago today.

At first I thought we would occupy ourselves primarily with the election, but it didn't take long for SACSTW to careen off in another direction.  After all, there are any number of outlets where you can hear the latest banal politital analysis if you so choose.  But let's be honest...there aren't too many that cover the craziness of our world like SACSTW.

The first few weeks we were a little cautious, feeling our way through the blogosphere like the rank amateurs we were. That all changed on September 26, 2011 with the publication of Sahib's classic "Raising a Nation of Mush-Brained Wusses".  That post blazed a trail for the snark, sarcasm, and satire that is SACSTW's trademark.  Soon after, a little thing called Occupy Wall Street happened, and our cup was overflowing.

No one escapes the arrows of SACSTW, we will skewer anyone who.....

SACSTW interrupts this maudlin, self-congratulatory pablum to bring you late breaking news and definitive evidence that the devolution of Homo sapiens is nearly complete. South Carolina authorities have charged 55 year old David Hoyt with shoplifting $75 in steaks from a Food Lion store in Spartanburg County.  Seems hum drum you say?  What is interesting about another shoplifter?  Dear readers, let me assure you Mr. Hoyt is no ordinary shoplifter.  Upon questioning, Hoyt's girlfriend confirmed that the scalawag had stolen the steaks by....hiding them in his colostomy
bag.

And so it has come to this.  After 4 years, 390 posts, and with readers in over 100 countries, I find myself without words.  All because of David Hoyt and his colostomy bag of purloined protein.

I'll just close with this.  Sahib and I have been writing partners for 4 years, and friends for almost 10 20 30, for crying out loud it has been damn near 40 years!  Happy 4th Birthday buddy!

Editor's Note- that is the colostomy bag guy, not Sahib.