The Campaign Speech I Would Love to Hear...

Sahib gets a new job! 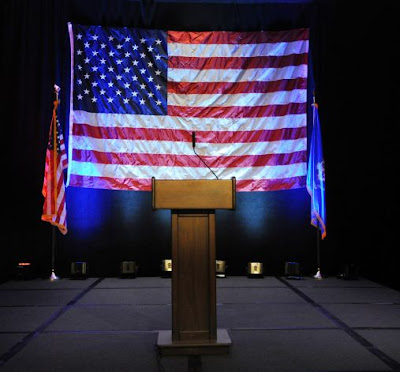 OK, maybe I don't have a new job but I would like to offer my humble talents to any conservative candidate who wants a straight from the hip, no nonsense, campaign speech writer.

So as the corner undocumented pharmacist always says to prospective clients with a pharmacological preference (practicing up on my PC lingo, don't want to be accused of micro-aggressions), the first taste is free.  Here is a campaign speech I would love to hear:

My fellow Americans.  I stand here today humbled at the opportunity to possibly follow in the footsteps of such great American heroes as Washington, Jefferson, Lincoln and Reagan.  A prospect I take with the utmost gravity. As such, my first speech as a candidate will be filled with promises.  (Wait for audience skeptical response)  I know, I know.  A politician making promises.  I can already hear the jokes.  But wait there is more!  It will be filled with honesty as well.  Brutal honesty.  And yes, my lips will be moving throughout this speech.  So buckle in.  Here goes.

If elected, I promise that I will occasionally lie to you.  For instance; when Iran inevitably reneges on the current nuclear deal, I am sure I will be asked about a possible military response.  I will lie.  "Of course we have no plans to coordinate with Israel concerning the complete obliteration of all Iranian nuclear facilities. How silly of you to ask!  And it definitely will not be happening next Tuesday!"

Unlike some of my predecessors, however; I promise I will never lie to forward my political agenda or to push through legislation that forwards said agenda.  There will be no more of the legislative "Don't ask, don't tell" you have to pass the bill before you can read it.

I promise to take the Alexandrian approach to the regulatory knot that my predecessor has created. Federal departments and agencies will be on notice as of day one of my presidency that regulations are going to be slashed. The EPA, HHS, IRS, and ICE in particular will be under the microscope.

All judicial appointees, particularly those to the Supreme Court, will be vetted not on their political views but to their adherence to the Constitution of the United State of America.

The tolerance of illegal immigration ends today.  We are a nation of laws.  Unlike previous administrations, my presidency will make following those laws a priority.  All laws regarding immigration will be enforced.

I realize that everyone may not agree with my political stances.  That is the beauty of our political system.  You don't have to.  If you don't like what I have to say, guess what?  Don't vote for me.

I really hope you all have enjoyed your first peek into what my presidency will be like. There will much more to come in the weeks and months ahead.  God bless you all and God bless the United States of America!

I will be waiting for the phone to ring...