Raising a Nation of Mush-brained Wusses 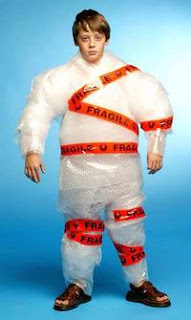 Now don’t get me wrong… When my first son was born, my wife and I went a little overboard with the whole baby safety thing. We watered down the Jack Daniels in his bottle, only loaded the Smith and Wesson 357 in his crib with blanks, and made sure that he only smoked low-tar cigarettes. But as a nation, we are really taking things too far in protecting our little mush-brained darlings from themselves.

Case in point is the recently expanded recall of the Little Tykes Toy Workshop, Trucks, and Tool sets. The 2009 recall has been expanded from 1.6 million units to over 3.3 million units. When I first saw the headline I wondered, what could possibly be the problem? Were they radioactive? Did they spontaneously burst into flames? Did they shoot razor sharp spinning disks of death? No. Apparently, the 3 ¼ inch by 1 ¼ inch plastic nails present a choking hazard. Hmmmmmm….. Well, I guess if thousands of little bubble-wrapped mush-brains are dying from jamming them down their gullets maybe something should be done. I read further…. There have been two reporting incidents where both children were treated and made full recoveries. Two. Out of 3.3 million. That is a whopping .00000006 percent! WOW! As a parent, I feel my boys are so much safer.


Everyone raise their hand… Who out there didn’t learn the hard way that sticking a screwdriver in an outlet has some unpleasant side-effects? Didn’t do it again did you? (If you did, I can only assume that you voted for Bill Clinton twice but I digress.) Firecrackers in Coke bottles, homemade flamethrowers from cans of Raid, sledding while holding on to car bumpers, and bike ramps built at a 45 degree angle, from particle board, at the bottom of a steep hill. These were all invaluable teaching moments growing up. It taught us that bad decisions have consequences. Did we blame the particle board for splitting and launching us 15 feet straight up in the air? Did our parents sue the particle board manufacturer for making a defective product and not properly labeling the particle board with warnings about not using particle board for 45 degree bike ramps located at the bottom of steep hills? NO! Our moms shoved the protruding bones back into our arms and proceeded to beat us with the remaining particle board fragments all the way home.

No one wants to see their children harmed. But as parents, and by extension a nation, we do our children more harm than good by not allowing them to experience the consequences of their stupid decisions. We prefer to hermetically seal them in bubble wrap and 42 point harness them into safety seats until they are 40.

When, instead of overprotecting our children, blaming others for their mistakes, and rationalizing their poor behavior, are we as parents going to start teaching them personal responsibility? Maybe right after we start taking responsibility for our own actions. I’ll start holding my breath.
Posted by Sahib at 11:28 AM