Can We Please Ease Up on the Nazis? 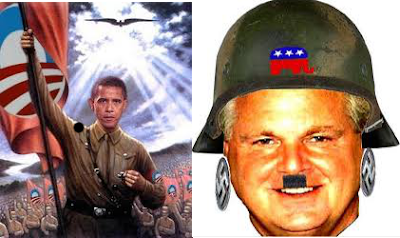 Let me get this out of the way before anyone misconstrues this post...

I am a staunch defender of Israel and the Jewish people. The Jews are God's chosen people. You mess with them and you experience "grief and woe of Biblical proportions." (Pun intended.) Don't believe me? How are those Egyptian, Babylonian, Chaldean, Persian, Roman, British, and Third Reich empires working out for everyone? The Nazi "Final Solution" to the "Jewish Problem" is probably the most definitive example of evil incarnate in modern times. Followed closely by communist/socialist stalwarts "Smoking" Joe Stalin and Mao Zedong re-educating their own people to death.

That being said, can we please ease up on the whole Nazi thing? It is getting old and tired. When Rush came up with Feminazis, at least he was original. The Soup Nazi was hilarious on Seinfeld. I affectionately refer to friend of SACSTW, Rabbit, as the Grammar Nazi. But really, enough is enough. Quit referring to every person you disagree with politically as a Nazi. Last week, "Hanoi" Jane Fonda and her has-been buddies chastised Rush for being mean and calling Sandra Fluke names, and then proceeded to call him a Nazi. Not that I expect anything less from the comedically challenged left, but come on! There has to be at least one creative and funny mentally deranged lefty out there. (And no Bill Maher, you are not that person.)

Be funny. Be original. Think of something new. For my conservative friends, the possibilities of satirical comparisons for Obama and his minions of insufficient light are legion. Quit being lazy. Come up with something fresh.

Next item on the Nazi agenda: Can we please stop the self-flagellation every time someone makes an oblique reference to WWII Germans? Case in point, David Axelrod (no, I'm not a fan) referred to Romney's media campaign in Illinois as a Mittzkrieg. This was actually quite clever in my opinion. But right on cue, people have immediately called on him to apologize for making Holocaust references.

Huh? As an amateur World War II historian, Blitzkrieg is the anglicized word for "Lightning War". It is a military strategy, and not even one originated by the Germans. It is an all-motorized force concentration of tanks, infantry, artillery, combat engineers, and air power. The first European general to introduce rapid movement, concentrated power and integrated military effort was Swedish King Gustavus Adolphus during the 30 year war. Yes, the Germans did use the strategy in WWII, and yes, the Germans also perpetrated the Holocaust, but the connection between German military strategy and the systematic mass-murder of Jewish civilians by the German government is tenuous at best.

Holocaust survivors survived HITLER! I imagine they are made of sterner stuff than to let a tangential reference to WWII German military strategy wound them. HOWEVER, if any Holocaust survivors are emotionally hurt by such references, the person making them should apologize. They have dealt with enough. But I want to hear it from them, not from any political organization. Not even one I agree with.

I guess the moral of this story is:  No more Nazis please!
Posted by Sahib at 9:09 AM