President Obama will hold a press conference, his first in almost 4 months, today at 1pm EST.  Although it might seem strange for Dear Leader to hold a presser on Super Tuesday, it makes perfect political sense.  On the day when GOP voters in ten states will go to the polls to help select his general election opponent, Obama is doing everything he can to continue the fabricated furor over "Contraception-gate".

While Obama's introductory statements will be about his meetings with Benjamin Netanyahu, he will be salivating in anticipation of the first Sandra Fluke question.  Then the bashing and demonization of the GOP in general and Rush Limbaugh in particular can continue unabated. 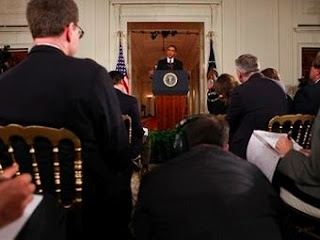 Unfortunately, SACSTW will be at the conference in spirit only.  That hasn't stopped me from formulating a list of questions I would like Dear Leader to address.

1) Do you believe that voter intimidation should be allowed at polliing places, as long as it is conducted by large black men carrying blunt weapons?

2) Do you agree with your Justice Department's decision to withhold significant exculpatory evidence from the defense in the ethics trial of former Senator Ted Stevens?

3) Do you believe that the Republican Party is actually waging a war on women as postulated by the Democratic Senatorial Campaign Committee?

4) Do you believe that Speaker of the House John Boehner and U.S. Representative Eric Cantor are, in fact, non-human servants of Satan?

5) Do you believe that members of the Tea Party should "go straight to hell"?

6) Do you believe that Laura Ingraham is a slut?

7) Do you believe that Michelle Malkin is a "big mashed-up bag of meat with lips"?

8) Do you believe that Sarah Palin is a profoundly stupid twat?

9) Do you believe that S.E. Cupp should have been aborted by her mother?

10) Finally Mr. President, and most importantly....What percentage of an American citizen's income should he or she be allowed to keep after local, state, and federal taxation?