The United States Poultry Producer Association is pleased to announce the co-winners of the coveted Silver Hen Award for 2012.  Given to the individual(s) who have done the most to promote and encourage the consumption of poultry, the 2012 Silver Hen award goes to Rahm Emanuel, mayor of Chicago, and Tom Menino, mayor of Boston.

Recently, Dan Cathy, the president of ChickFilA expressed his support for "the biblical" definition of marriage and family.  Reacting with predictable outrage, Mssrs. Emanuel and Menino lashed out at the privately held company.  Emanuel was quoted as saying "ChickFilA values are not Chicago values", and Menino sent a missive to Mr. Cathy admonishing him and advising him there is no place in Boston for ChickFilA.

After news of these comments spread across the nation, supporters of ChickFilA and lovers of free speech, conservative values, and white meat struck back.  Designating today, August 1st, as "Support ChickFilA" day, they descended on the company's 1,608 stores in droves.  Across the country, long lines of American freedom lovers waited for up to 90 minutes to express their support for private business by sinking their teeth into a juicy chicken sandwich.
Inside a mall in Kansas City 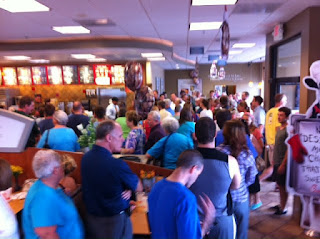 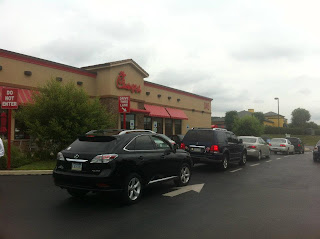 South Carolina traffic waiting to get to ChickFilA 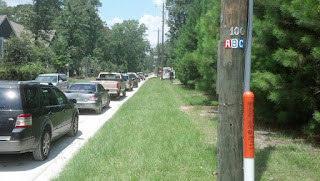 Congratulations to Mayors Emanuel and Menino, for all their hard work and lunacy that resulted in the single greatest day in the history of the chicken sandwich!