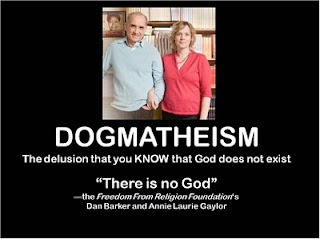 According to multiple news sources, the Wisconsin based Freedom from Religion Foundation, or FFRF (I find it ironic that their acronym sounds just like the noise I make when I've eaten too much spicy food), has sent a letter to the superintendent of Walker County Schools in Georgia demanding an investigation into the behavior of Ridgeland High School football coach Mark Mariakis.

Coach Mariakis has been holding forced baptisms in the team whirlpools and branding all his players with the image of the cross and the words "John 3:16".  Wait, I'm sorry.  I must have read that wrong.  Apparently, local churches of varying denominations have been providing dinners for the football team on game-days. Whoa!  This guy makes Jerry Sandusky look like a saint.  He's allowing churches to feed his players for free????  The monster!

The FFRF purpose is to "protect the constitutional principle of separation between state and church".  In a quote from a Fox News article, “Taking public school football teams to church, even for a meal, is unconstitutional,” wrote FFRF attorney Andrew Seidel. “This program is an egregious violation of the Establishment Clause and must cease immediately.”

For those of you who civics class was more than a year or two ago, here is the text of the first amendment of the US Constitution:


Congress shall make no law respecting an establishment of religion, or prohibiting the free exercise thereof; or abridging the freedom of speech, or of the press; or the right of the people peaceably to assemble, and to petition the Government for a redress of grievances.

Now as many times as I have heard "separation of church and state", I have never been able to find that text in the first amendment or anywhere else in the constitution for that matter.  The only thing I see is that congress isn't supposed to make any laws creating or establishing a religion.  I struggle to understand how allowing a variety of different churches to feed your football team has anything to to with congress making a law.  Maybe some of our liberal constitutional scholar (wow, is that an oxymoron or what?) readers can enlighten me.

Otherwise, I am left with only one conclusion.  Atheists want to starve our children.