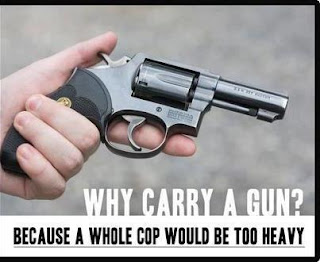 Uh Rahm, just an FYI... Illinois is the only state out of all 57 that specifically bans carrying concealed guns. I guess maybe he meant that they wouldn't change the law to lift the ban.

Contrast that story with this one from Jacksonville, Florida. A 57 year old grandfather with a concealed carry permit shot a killed an armed robber at a Dollar General Store and drove off his accomplice.

So lets do the math shall we? A city in a state with the country's most restrictive gun laws is experiencing uncontrolled violence and mayhem. How many more robberies do you think Jacksonville Dollar General Stores can expect in the near future? My guess is not many.

Is Rahm's solution arming citizens so they protect themselves? Not exactly... "I'd like to remind everybody that it also requires a community to step up," Emanuel said Monday at an unrelated press conference. "You're not a snitch, you have a role in community policing."

Yes devoted readers one of Obama's closest friends and former adviser's strategy is to rat out that gang-banger, dope-dealer, pimp that is shooting up your neighborhood. But don't you dare carry a concealed gun to protect yourself, or Chicago's finest will be coming after you.
Posted by Sahib at 2:13 PM