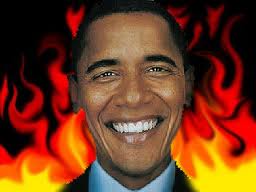 Last night as I was (belatedly) preparing my motorcycle for the riding season, I opened a saddlebag to store my new registration and proof of insurance.  In the bottom was a USB flash drive with a note attached.  It said: "Dear Sahib and The Crew, I have gone to great lengths risking life and limbs to provide you with this audio recording of Dear Leader Obama and his inner circle.  Please share this with your readers.  The world must know!  Your friend, CT."  I immediately contacted The Crew. Below is a transcript of what we heard.  It is truly terrifying.


BHO:  Welcome everyone.  Before we get started, what does everyone think of my new tat?  What?  Isn't it obvious?  It's Warren Buffet and George Soros making out.  Pretty cool huh?

OK, let's get down to business.  I've come up with a plan that will accomplish the vast majority of our goals in one fell swoop.  Yes Joe?  No you can't turn on the Cartoon Network.  Please pay attention.  Like I was saying, I have a new plan.  Here are the basics:

Those are the basics.  We increase the number of people dependent on government support and play on their class envy by showing we are making the rich pay their fair share. This will also choke off funds to groups we find offensive and cause them to fade into oblivion. The masses will love it!  We'll be in power forever. Questions?  Yes Tim.

Treasury Secretary Tim Geithner (TG):   I get the gist of your plan, but am a little concerned how you plan to implement it.  Does everyone get like a government debit card that has their tax bracket and access to their financial accounts?  If so, how do we keep rich people from paying poor people to buy stuff for them using their lower bracket cards?  Also, what kind of groups would be considered "discriminatory"?

BHO:  Excellent questions Tim!  This is the beauty of my plan.  There are no cards. Each person has a programmable chip with their information embedded in their right hand.  If they don't have a right hand, it's embedded in their forehead.   No person-to-person financial transactions are allowed.  All payments for goods and services go through a federal transaction system.  Any suspicious transactions will be flagged and investigated. Violators will be imprisoned.

As to your question about which groups would be considered discriminatory, the usual suspects.  You know the Boy Scouts, evangelical Christian denominations, the Salvation Army, the RNC etcetera, etcetera. Anyone else?  Yes, Hillary.

Secretary of State Hillary Rodham Clinton (HRC):  I'm a little concerned about public response to your plan. Having been often referred to as Lucifer's mistress, usually by Bill but by others as well, I am uniquely sensitive to certain religious parallels being drawn.  Aren't you worried about people referring to the chips as "the mark of the beast"?

BHO:  I'm sure there will be a few religious whackos that will make that comparison, but it's not like we're making everyone get 666 tattoos. (Another chuckle) Next question. Yes, Debbie.

DNC Chairperson Debbie Wasserman-Schultz (DWS):  How did you come up with the plan and what are you going to call the new federal agency to oversee it?

BHO:  The plan was told to me by the voice behind the glowing red... I mean I thought of it myself. The new agency will be called the department of  State Annuity Transactions And Numeration.

Well, that's enough questions for this evening.  We'll iron out the details later.  Stanley's (Obama's unicorn) been waiting patiently this whole time for our evening ride on the South Lawn.

This was the end of the recording.  After listening to the recording with The Crew, and waiting for my terror level to diminish, I went back out to my motorcycle to look for more clues as to CT's identity.  I noticed some drops of liquid that at first looked like motor oil.  On closer inspection, it was oil, but not motor oil.  I'm no expert, but I think it was crude oil.  Hmmmmm...
Posted by Sahib at 9:49 AM