Democrats Looking to Exorcise The Demons of the GOP


Was there some nationwide screening of the Exorcist for liberals that I don't know about?  Everywhere I look today, some progressive whackitron is making references to casting out the demons and evil spirits that are the Republicans.

First up is Clarence B. Jones, with a column at The Huffington Post titled..."Demonizing Obama and the Politics of Morality".  Read it here if you are done eating.  Obviously Clarence, the left would never stoop so low as to "demonize" a political opponent, right?  Uh, not so fast pea-soup breath!

Next is SACSTW favorite Maxine Waters.  Speaking to California Democrats, the lovely, reasoned, and well balanced Rep.Waters (D-Ca) had this to say on the topic of Satan's minions....

Shockingly, no mention of a member of Congress referring to other members as "demons" made its way onto the websites of ABC news, CNN, MSNBC, or CBC.  The Huffington Post did obliquely mention the story, but only in a hit piece on Fox News anchor Eric Bolling, who advised Waters to "step away from the crack pipe".  Not only did the kind and gentle Rep. Waters call 2 GOP leaders "demons", she went on to characterize them as "legislators who are destroying this country rather than bringing us together".  There's an old saying about a pot and a kettle that would be appropriate here, but I don't dare use it as it also contains the word "black".

Actually, part of what Maxine spewed is correct.....this conservative doesn't want to "come together" with Mad Maxine.....short pause while the cold chill finishes traversing my spine...., I want Maxine and her gang of haters to go away, and never foul the stage of government again.  Conservatives need to be trying to defeat and vanquish, not compromise with people who want to "transform" America.

Finally there is this question.....how does a Republican presidential candidate know when the liberal establishment is worried about him?   Answer:  When the Huffington Post runs this photo as the lead on their Politics page...... 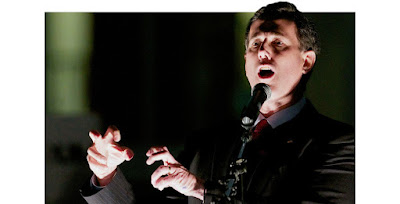 Creepy lighting....check
Gnarled claws for hands....check
Mouth open in mid-satanic chant....check
Name that kind of sounds like some religious thingy....check
Thank goodness the liberal establishment would never seek to demonize conservatives!
Posted by the Crew at 11:16 AM