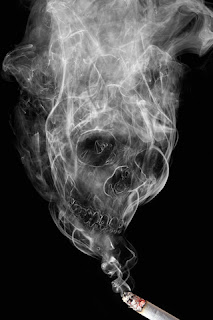 The idea for this post began as many of them do. I was glancing through the daily news headlines on the Internet and went HUH? This gem on Fox News caught my eye, “Louisiana Hospital to Ban Odor of Smoke on Workers’ Clothes”. Now many businesses have banned smoking in the workplace, even on breaks, but this is the first time I have heard of employees not being allowed to work because their clothing smelled like smoke. I thought, gee, that’s kind of harsh and continued to read. I found this quote. “Hospital officials are aiming to reduce patients' and employees' exposure to toxins that linger in fabrics from a recently burned cigarette, also known as third-hand smoke, Lauve said. Such toxins present a special danger for the developing brains of infants and small children.”

OH NO! More mush-brained toddlers that will require hermetically sealed bubble wrap!* We have only recently escaped the horrible dangers presented by second-hand smoke, and now we have third-hand smoke to worry about? Surely fourth and fifth-hand smoke cannot be far behind. Will this nefarious evil never stop?

Prepared to race to my children’s schools and drag them to safety due to the likelihood that at least one of their teachers had smoked a cigarette sometime in the last 20 years, I did a little quick research on the interwebs. Several bastions of journalistic integrity had articles concerning this new pernicious phenomenon. The New York Times, MSNBC, the Today Show, and even the Scientific American ran stories about this devastating threat. Finally, I read something that chilled me to the very center of my soul… “Third Hand smoke contains polonium-210, the highly radioactive carcinogen that was used to murder former Russian spy Alexander V. Litvinenko in 2006.” HOLY CRAP! Now I have to stop by Home Depot on the way to the boys’ schools and pick up a friggin’ Geiger counter! (Anyone know what size batteries they take?)

Then years of logical and rational thinking slithered their way through my brain along with a healthy dose of skepticism. Wait a minute… All these articles reference the same guy’s study. Okayyyyyyy… So what did this seminal work measure? Did the study’s author perform double-blind experiments involving thousands of participants? Did he take thousands of samples and run them through a mass spectrometer? NO! The honorable Dr. Jonathan P. Winickoff went even bigger and better. He did (drum roll please) a PHONE SURVEY! He called people and asked them if they believed third-hand smoke is harmful. Where is this guy’s Nobel Prize for Medicine? He should be our next Surgeon General.

Now to be honest, I don’t smoke and kind of like being able visit my wife at the bowling alley (NO COMMENTS PLEASE!) without coming out smelling like a cigarette, but people COME ON! When will you stop believing the swill you get fed every day by the sensationalist media and start thinking for yourselves? Kids being born with brain defects because their moms were around someone who smoked in the car on the way to work? Exercise your critical thinking skills please. This is simply another thinly veiled attempt to force more people to quit smoking. Look for more third-hand smoking rules and regulations soon coming to a town near you.**

Besides, if as a race humans are that susceptible environmental hazards, I’m thinking cockroaches might deserve to be at the top of the food chain.


*For more information about hermetically sealed and bubble wrapped children, check out the earlier post "Raising a Nation of Mush-brained Wusses".

**Has anyone given any thought to smoking gulags? I hear there is lots of space in Montana.
Posted by Sahib at 12:47 PM