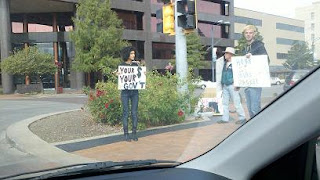 NEWS FLASH!
As predicted, the Occupato Mafia (formerly Occupy Wall Street) has oozed its way into the heartland. This picture was taken outside the Bank of America building in Topeka, Kansas. One terrified onlooker reported, "It was horrible! Cars were crashing all over the place! Drivers laughing uncontrollably were unable to maintain control of their vehicles."

Calls to the governor's office were responded to with the statement "Who?" However; one unconfirmed source with the capitol police (actually, some guy on the corner who claimed he was with the capitol police as well as the CIA, NSA, and FBI) was quoted as saying, "We may request national guard assistance from the governor. Some of the heckling these people are receiving is getting pretty nasty. We are afraid that their delicate sensibilities may be irreparably harmed."

Stay tuned to SACSTW (Sahib and Crew Save the World, for new readers) for the latest updates to this fast-breaking story.
Posted by Sahib at 12:29 PM