Is it just my imagination, or is there a GOP debate scheduled every night for the next 3 months?  Every media outlet in the country is sponsoring one, I hope both subscribers to Bloomberg TV enjoyed this week's installment.  Stay tuned for an announcement regarding the Sahib and the Crew Save the World GOP Presidential Debate coming soon!

On the serious side, it is easy for interested observers of these debates to get bogged down in the numbers, plans, promises, and other canned minutia that the candidates regurgitate at every opportunity.  I prefer to listen closely for insights into the core philosophy of the individual, rather than their grandiose plans that will most likely never see the light of day.   Reading the debate transcripts (this week's New Hampshire debate transcript is available here) is another way to gain a look behind the curtain and measure the true nature of a candidate. 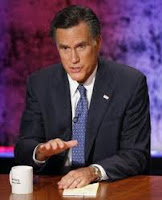 From time to time, a candidate will let out a candid thought that can tell us what they really believe.  GOP front-runner Mitt Romney had just such a moment in this week's debate.  Romney was being questioned by fellow candidate Newt Gingrich why his tax plan called for a capital gains tax cut only for people under $200,000 in income.  Gingrich commented, "Now, as a businessman, you know that you actually lose economic effectiveness if you limit capital gains tax cuts only to people who don't get capital gains".

Towards the end of his response, Romney's conservative facade crumbled and he said this, "And so if I'm going to use precious dollars to reduce taxes, I want to focus on where the people are hurting the most, and that's the middle class..."

Mitt Romney is just another in a the long line of politicians who believe that taxpayer money "belongs" to the government, and must be "used" or "spent" to provide tax cuts.  Listen Mitt, my money is way more precious to me than it is you.  Instead of you "using" it to give me a tax cut, how about you just let me keep it in the first place.  IT'S NOT YOUR MONEY!!!!!

Politicians on both sides of the aisle are constantly fretting about how the government will "pay for" some proposed tax cut.  Every one of them with that philosophy needs to be voted out at the first opportunity.  America needs legislators and a President who understand that every nickel they control belongs to an American taxpayer.  Notice you never hear any of them worrying about how taxpayers will "pay for" proposed tax increases.  They assume we will just tighten our belt while they let theirs out a few notches to accommodate their bloated bellies.  No more.

Fortunately there was a candidate or two at that New Hampshire table who understands and more importantly believes that IT'S NOT THEIR MONEY.  Watch and listen to them closely over the next few weeks and you will be able to identify these true conservatives.
Posted by the Crew at 9:11 AM