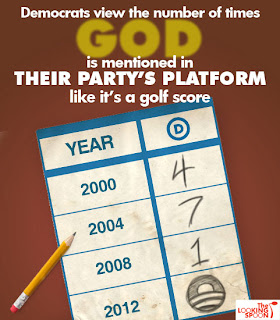 After years of conservatives warning Americans that Democrats and the left hate God, the Democrat National Convention in Charlotte has given us our most compelling evidence to date.  After hoping no one would notice the removal of the single reference to God from the DNC 2008 platform, DNC leaders, true to form, spinelessly put it back. Again showing no principle is worth the loss of votes for the left.  That they removed it and then put it back in the face of withering criticism is not the telling part.  It is the reaction of the DNC delegates that demonstrates that a great number of Democrats really hate God.  From a Fox News story on the vote to put God (and Jerusalem) back in the platform:


"A large and loud group of delegates shouted "no" as convention chairman, Los Angeles Mayor Antonio Villaraigosa, called for the vote late Wednesday afternoon. Villaraigosa had to call for the vote three times before ruling that the "ayes" had it. Many in the crowd booed after he determined the language would be restored."

They had to call for the vote THREE times.  And from Michigan delegate Rashida Tlaib:


“The majority of the delegation here at the Democratic National Convention supported the previous language (the one with God removed) and instead after three attempts to vote and it failed twice, and for whatever reason it still failed but was still pushed through.”

I loved what Mitt Romney had to say about it:


"(That) this party purposely removed God from their platform suggests a party that is increasingly out of touch with the mainstream of the American people," Romney said. "I see it as being as out of touch and detached."

It's not that I believe that ALL Democrats hate God, it's just the ones who don't think his name is Barack Obama.

**Editor's note:  Man, am I going to hear it from my sister on this one. She's the liberal black sheep of the family