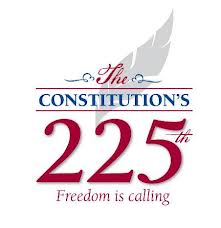 There's really only one thing I'm thinking about today, and that is the United States Constitution.  A few pages of elegantly simple prose that have wrapped the American people in liberty and freedom for 225 years, and been a beacon of hope for the less fortunate around the globe.  I'd thought I'd rerun my Constitution Day post from last year today.....


A Date Too Few Will Recognize


Several dates are part of the American pysche, and well known by most.  Some like July 4 1776 are celebrated for their glorious role in our history.  Some like Dec. 7 1941 and Sept. 11 2001 are observed for more solemn reasons.

Sadly, perhaps the most important date in American history goes unobserved by most of us.  That date is today, September 17th.  On that day in 1787, delegates of the Philadelphia Convention signed the United States Constitution into being.  Although it wouldn't actually take effect until 1789, the Constitution was born on Sept. 17, 1787.  The signing culminated months of debate, discussion, and dissent from the delegates.  Out of that cacophony of voices and opinions came the greatest document ever produced in human history.  The long, grueling process undertaken by the Philadelphia Convention is beautifully chronicled in David Stewart's book The Summer of 1787.  Every American should read it.

We all consider Independence Day as our national birthday, and rightly so.  The Declaration of Independence was our notice to the world that we would fight for our rights as Americans, and throw off the yoke of British monarchy.  It wasn't until more than 11 years later however, that we gave notice the United States was here to stay. Never before in human history has a single document been the source of as much liberty, freedom, opportunity, and hope as the Constitution of the United States.

I get a twinge of sadness every year when Constitution Day rolls around.  Just thinking about how grotesquely the federal government violates the Constitution every single day gives me great pause.  Is that how we want to treat that most precious legacy of our Founders?  Carefully constructed by them to constrain and limit national government, the Constitution has been under secular progressive assault for over a century.  Liberal statists like Barack Obama see the Constitution as an impediment to their "transforming America".  True patriots know that the Constitution is the only thing that stands between us and overwhelming tyranny.

It is time ordinary Americans stand up and take action to "preserve, protect, and defend" the Constitution of the United States.  Apparently those words are meaningless to Barack Obama.  The first step to take is obtain your own copy of the Constitution.  I recommend Essential Liberty, a tiny pocket sized guide to the Constitution and the other founding documents of the United States.  It is available at http://www.patriotpostshop.com/.  Buy several, distribute them to your friends, and READ IT.  Keep it in your purse, briefcase, glovebox, wherever.  Refer to it when you hear discussion of constitutional issues.  Don't let the secular progressives tell you what the Founders "really" meant.  Read their words for yourself.

Editor's note-  Sahib and I have had an interesting Constitutional debate with reader Doug in the comments section of this post...