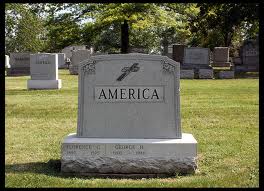 I remember the last time I ached for my country like I do today.  It was a Tuesday morning, and I was sitting in my office watching television.  The date was September 11, 2001.  I watched fellow Americans leap hundreds of feet to their deaths to escape the flames.  My pain that morning was quickly overshadowed by anger, a desire for vengeance against the perpetrators of such evil.

Today is different.  I feel the same kind of pain and anguish for my country, but I'm all out of anger.  In its place is shame and resignation.  Shame that we have allowed this to happen to the magnificent gift we were given by men like Washington, Adams, Madison, and Jefferson.  Shame that the lives my children have in front of them are now colored by socialism and federal tyranny rather than freedom and personal responsibility.

I feel resigned to the idea that the statists have won.  There are too many people in our country who now expect the government to provide for them cradle to grave, too many who have learned what de Tocqueville warned about.......

“A democracy cannot exist as a permanent form of government. It can only exist until the voters discover that they can vote themselves largesse from the public treasury. From that moment on, the majority always votes for the candidates promising the most benefits from the public treasury with the result that a democracy always collapses over loose fiscal policy, always followed by a dictatorship. The average age of the world's greatest civilizations has been 200 years.”
― Alexis de Tocqueville

Three months ago in this space, I wrote the following line...

If the individual mandate is upheld by the court, then the great American experiment is over.

And over it is.  Next Wednesday would have been the 236th birthday of that experiment, but we didn't quite make it.  Of course, tomorrow morning the map will still read "United States of America", but that is in name only.  I've heard all the pundits and analysts today down in the weeds of Obamacare, talking penalty versus tax, pre-existing conditions, employer responsibilities, rising premiums, blah blah blah.

Those of us who love the Constitution, and believe in the idea of limited government, have been lied to.  We have been told that we should fight for our ideals at the ballot box and in the court rooms.  I never really believed that, but I was willing to play along. Not any more. The federal government has become a living, breathing monster, one that will never allow itself to be defeated by the mere act of voting.  We must now realize that the fight for freedom will require more stringent measures, just as it did almost 236 years ago.
Posted by the Crew at 3:53 PM