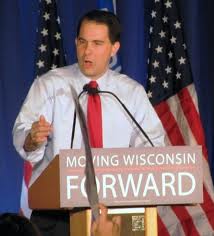 This morning, the sky seemed just a little more blue.  The birds were singing a little more cheerfully.  And for the first time in a long time, I have a little hope for the grand experiment in liberty known as the United States.  The architect of that hope is Scott Walker, who retained his job as governor of Wisconsin by winning yesterday's recall election by 7 points.

This was not just a political victory for Walker, it was a colossal first step in beating back the encroachment of leftist tyranny.  It was a emphatic statement that, at least in Wisconsin, ordinary citizens will not be cowed by union thugs.  They will not be intimidated by mobs of imported goons, nor allow their state to swerve off the long road back from financial oblivion.

This morning, Scott Walker, Rebecca Kleefisch, and every Wisconsin citizen who voted for them are American heroes.  Those on the losing side had a somewhat different reaction than the Crew......


Young man, it was indeed a bad day for the kind of mob rule democracy that leftists espouse.  However, it was a glorious day for the representative republic that our Founding Fathers provided for us.  Back to Civics 101 for you.
Posted by the Crew at 8:25 AM