What Does "Gun" Control Really Mean?


Obviously our nation is currently embroiled in a vigorous "gun-control" debate.  The debate is doomed from the start, as the term "gun-control" is a non-sequitur. 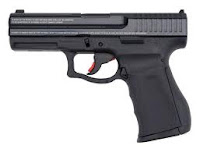 Guns are inanimate objects, and as such are not subject to any laws or regulations.  They, like all inanimate objects, can respond only to physical forces and elements applied to them.  Press a gun's trigger firmly enough, and it will fire a chambered round.  Immerse it in water and metal components may rust.  Expose it to high enough temperatures, and it may melt into an amorphous blob.

Make no mistake, "gun-control" is about governmental control of people, not guns.  It is no different than any other governmental intrusion into the lives of the citizenry.  With each incremental increase in government's control over the populace, individual liberties take a corresponding decrease.  Many are comfortable having the federal government exert tremendous power over their daily lives, I am not.

I think what bothers me most about "gun" control advocates is their rank dishonesty.  I would have much more respect for them if they would just come out and admit that what they really want is a complete ban on private firearm ownership.  If only they would have the courage to boldly stake out their position, rather than cloaking it in politically palatable niceties.

This will never happen of course.  Statists learned long ago that rolling back liberty is much easier when done incrementally.  Me, I'm ready for the fight right now.   Come on you gun control pantywaists, make your play.  Knock on my door and tell me to turn my guns in.  Go ahead, make my day.
Posted by the Crew at 12:01 PM