With the horrible and tragic deaths that occurred last Friday in Connecticut, the hue and cry for more gun control laws has begun.  President Obama launched the first volley with his thinly veiled statement,


"These tragedies must end, and to end them we must change."

I agree with President Obama, but I suspect our strategies to affect that change will be radically different.  Take a few moments to peruse the images below: 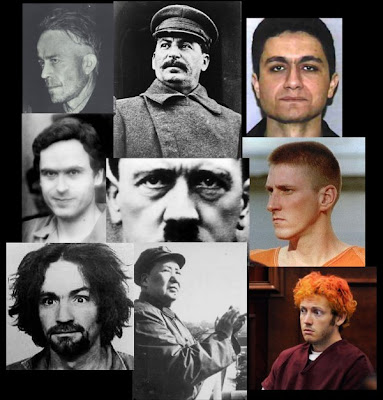 With one possible exception, does anyone believe gun control laws would have prevented the murders these men committed or for which they were directly responsible? And even in the case of James Holmes, as disturbed as he is, who is to say he wouldn't have gone the Timothy McVeigh route resulting in a greater loss of life.

As others have pointed out, including this post by the wonderful Dana Loesch, the majority of these mass shootings occur in "gun-free" locations.  She also emphasizes a point that many gun-control enthusiasts often neglect:  How many tragedies are stopped by law-abiding, gun-carrying citizens?  According to her post, American citizens use firearms in self-defense more than 2.1 million times annually.

Here is my suggestion for "change".  Put prayer back in schools.  Have school children say the pledge of allegiance every day through high school.  Create a national campaign touting the benefits of two-parent homes.  Teach children the constitution starting in elementary school.  Offer gun-safety classes in schools.  Re-introduce corporal punishment in schools.  Create a campaign that de-stigmatizes spanking the children at home.................   Unfortunately, unless you plan on home-schooling, these things will probably never happen, but here are some concrete solutions that we COULD institute:


You may think I'm kidding, but when was the last time you heard about some nutjob shooting up a NRA or Ducks Unlimited banquet?  Even with the Fort Hood shootings, the terrorist whack-job picked a spot on the post where he knew the soldiers would be unarmed.

Will any of these measures completely stop EVIL people from doing EVIL things?  No, but they will be 100% more effective than adding more gun laws.  Just ask the people of Chicago how well gun bans are working out for them...
Posted by Sahib at 8:54 AM