A couple interesting and conflicting viewpoints on the U.S. military surfaced in the last few days.

First up is former Mousketeer and current actor/singer/superstar Justin Timberlake.  By now you probably know the story.  Last summer 23 year old Marine Cpl. Kelsey De Santis posted a Youtube video asking Timberlake to attend the Marine Corps Ball in November.  Not only did Timberlake accept the invitation, he held up his end of the agreement and attended the ball with Cpl. De Santis in Washington, DC last week.  While De Santis and her Corps colleagues were understandably stoked about the superstar's attendance, Timberlake's thoughts on the evening were remarkable and inspiring.  On his website, Timberlake posted a beautifully written article about his experience.  In part he said this:

“It was a surreal moment to be in that room with so many of our great Marines who have such a different type of connection to those stories. One that we who don’t serve will NEVER understand. It was familial. It was like they were listening to their own blood brothers. I glanced around the room at young men and women, spouses and soldiers… At kids way beyond their years, really… All so deeply entwined. Not just by battle, even though we who have never endured anything remotely close to those experiences and have NO position to comment on… But, by having such life changing experiences through them and to not ever waver in their love and respect for our homeland. That’s what I saw. A faith in us that has been tested time and time again. And, through it all, NEVER a drop of doubt.”
Please go to Timberlake's website to read the entire post.  I for one am not predisposed to appreciate boy band singers, but Justin Timberlake has grown up just fine.  As anyone who has seen his musical shorts with Andy Samberg knows, Timberlake is not just a great singer, but hysterically funny as well.  Mega-talented, self-deprecating, and greatly appreciative of the freedoms and opportunities afforded by our great country, Timberlake is the real deal.  Bravo Justin!
Next up is Suffolk University (Mass.) Law School professor Michael Avery.  Avery responded to a campus wide drive for care packages to send to overseas troops this way in an email:   I think it is shameful that it is perceived as legitimate to solicit in an academic institution for support for men and women who have gone overseas to kill other human beings
This is what your tuition payments are going for parents!  Professor Avery and his secular-progressive, anti-America colleagues are spoon feeding their vitriol to your kids on your dime.  Guess what the result is?  Moonbat city! 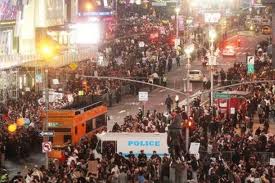 Professor Avery, you should be on your knees every night giving thanks that there are people like Corporal De Santis willing to put their life on the line to protect you and your liberal cronies from the evildoers in our world.  You sir, are the very definition of shameful.  How does it feel to be outclassed as a man by a Mouseketeer?
Let me know what you think about this at SACSTW@gmail.com
Posted by the Crew at 4:50 PM