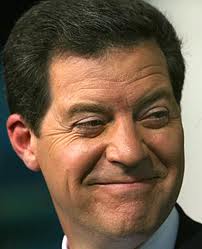 Governor’s Ministry of Adolescent Oversight-Internet Bureau
The KDCI/GMAO is pleased to announce today that it has uncovered and foiled a nefarious plot to disparage and ridicule Dear Governor Brownback.  The scheme was hatched at the Shawnee Mission East High School chapter of the KDCI and spearheaded by Student-Citizen Emma Sullivan.  At a Youth In Government meeting in the glorious capitol city of Topeka,  Student-Citizen Sullivan willfully and without regard for Dear Governor’s feelings sent the following Tweet…”Just made mean comments at gov. brownback and told him he sucked, in person #heblowsalot”.


Fortunately for Dear Governor, the Tweet Detection Section of the Ministry of Adolescent Oversight immediately sprang into action.  The offending Student-Citizen was verbally corrected by SME Principal Karl Krawitz in his office for approximately one hour.  She was advised that her Tweet had embarrassed the SME chapter of KDCI Bureau 512, and “damage control” was needed with the office of Dear Governor.  Principal-Minister Krawitz is instructing Sullivan on the proper points to cover in her written apology to Dear Governor.  Leaders of the Kansas Department of Child Indoctrination are pleased that this vicious attack on Dear Governor was so promptly detected and effective counter-measures so quickly deployed.  KDCI is expected to award Sherienne Jones-Sontag, director of the Governor’s Ministry of Adolescent Oversight, with the prestigious Orwell Award for excellence in citizen monitoring.

The sanitized version of this story appeared on the front page of the Kansas City Star on Thanksgiving Day.  The student involved is an 18 year old, self-described liberal senior at Shawnee Mission East High School.  Although her tweet claimed she had made comments directly to Governor Brownback, no such verbal comments were made.  Let’s get a few points straight here:

2.  The Crew is a conservative Republican


4.  The Crew is a conservative graduate of Shawnee Mission East High School


Freedom-loving Kansans of all political stripes should be horrified and disgusted that Sam Brownback is spending their tax monies (OPM) monitoring the internet for nasty comments about himself.  Here is a sentence from the Star story that is one the most chilling things I have ever read:

Brownback’s director of communication wasn’t amused when the tweet was spotted during the routine daily monitoring of comments on Twitter and Facebook mentioning the governor’s name.

Guess what Governor Brownback?  I’m not amused that you have state employees conducting “routine daily monitoring” of the Internet for people making snarky comments about you.  Perhaps you should re-familiarize yourself with the First Amendment.  Yeah, yeah, I know.  The First Amendment was written to apply to the federal government.  Still, I’d like to think that you as a former U.S. Senator would agree with the quaint little principle of free speech.
I am guessing that as a 47 year old male conservative, I disagree with about 99.9% of what an 18 year old liberal female says.  What I do agree with is her right to voice her opinion, even if her opinion is that a male conservative “sucks”.  As an SME grad, I am truly embarrassed by the school principal’s heavy-handed response, and Principal Karl Krawitz should be the one apologizing.  By the way, why do I have this slightly queasy, uneasy feeling about guys named Carl who spell their name with a “K”?  But I digress.  The student (a legal adult by the way) committed no crime, and threatened no violence.  She expressed a POLITICAL opinion to which the state of Kansas and the Shawnee Mission East High School principal took exception.  That my friends is a very slippery slope indeed.  I attended class in the Shawnee Mission School District from kindergarten through high school.  I have long thought it to be one of the very finest public school districts in the country, and have resisted the concept that public schools are indeed “Departments of Indoctrination”.  Now I am not so sure.  It is a sad day for this Shawnee Mission East Lancer.

As always we would love your comments on this issue below!  Or send them to SACSTW@gmail.com.