Ban Dodgeball? Fine By Me! 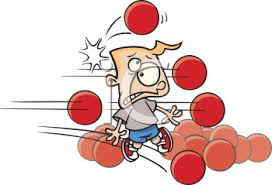 I read with sneaking dread last week's story about a school district in New Hampshire banning dodgeball and other "human target" games.  Apparently a parent complained that their child was being bullied during the games.  Here's the kicker......they were already playing with Nerf balls, not the red rubber playground balls that I ......that I.......that.....I...............remember.

This anti-dodgeball movement comes about 35 years too late for me.  Had I been born in a different time, a different place, I might have been spared the soul-shattering trauma.  But I wasn't. Back then we played a dodgeball variant known as bombardment.  Rules were simple, if your throw hit a player on the other side, they were out.  If the opponent caught your throw, you were out.

6th grade.  The final match of the year to decide which class had bombardment supremacy.  I was a good player, with a strong arm and catching abilities honed on the baseball diamond each summer.  The match was brutal. One by one the players on both teams fell by the wayside, adorned with scarlet playground ball size blotches on various portions of their anatomy.

At the end, only two were left.  Me on one side of the court, and Leann on the other.  Ahh, Leann.  One of the prettiest girls in school, soft-spoken and delicate in stature, kind to small animals and old people, and the LAST human on Earth you would want your team's bombardment hopes riding on.

As if Fate itself had decreed my victory, I had accumulated all the balls on my side of the court.  Leann was alone, defenseless, cowering in the corner of the court like a fly entrapped in the spider web of my athletic prowess.  I gave my fallen teammates on the sideline a confident grin, and calmly selected the instrument of Leann's demise from the collection of playground balls I had at my disposal.

No need to be fancy here I thought, don't give her a chance to unwittingly dodge the throw with the involuntary tremors that were racking her body.  I fixed her with a steely gaze, softened with just a touch of pity.  As I drew the ball back all pity left me, and I was filled with equal parts swagger and malice.

The throw was true, center mass, and resulted in a satisfying "thwack", closely followed by a wispy "oomph" as every last molecule of air left Leann's lungs in a rush.  I turned to my teammates, arms in the air celebrating certain triumph.  Wait.....why do they have such shocked expressions?  Why is there a roar arising from my vanquished opponents? 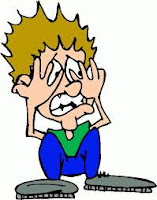 I whipped around as primitive horror began to clutch at my brainstem.  There was Leann, crumpled on the court surface where the impact of my projectile had left her.  Clutched in her diaphanous arms was....the ball.  She had caught my throw, and I had lost.

Leann's classmates swarmed her in victory as I stumbled off the court, seeking solace from my team.  Instead, I met with only callous disregard from my fellow 12 year olds.  I was an outcast, a leper, to be avoided at all costs.  When the fateful heave had left my hand, I was "King of Bombardment and All He Surveys".  When its flight ended in Leann's tenuous grasp, I was forever reduced to "the kid who threw the ball that Leann caught".

Uusally I am critical of school districts banning this, prohibiting that, all in the name of protecting the precious self-esteem of their students.  You will forgive me of course, if I make an exception for dodgeball.

Editor's note:  After not hearing her name in decades, I recently received a Facebook friend request from Leann.  I haven't slept well since.
Posted by the Crew at 9:56 AM