The Face Of Gun Control In Colorado

Everyone knows that gun control activists are busy all across SecondTermica, making grabs for your lawfully purchased guns, magazines, and ammunition.  Nowhere is this more true than in the Colorado statehouse.  Unfortunately, the great state of Colorado has succumbed to a massive influx of liberal statists from California.

The Colorado legislature has moved forward with several anti-gun legislative measures, and one of the lawmakers at the forefront is Representative Rhonda Fields.  A Democrat from Aurora, Fields has been a prominent voice railing against your Constitutional rights.  Let's see, I'm sure I have a picture of her somewhere....... 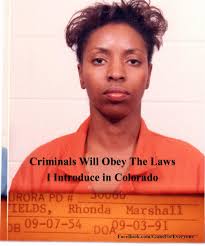 Ain't she a peach!  Now to be honest, I'm not sure exactly when this particular mugshot was taken....could have been in 1976 when she was arrested for larceny.  Or maybe 1991, when she was arrested for shoplifting.  I'm pretty sure it's not from 1998 when she pled guilty to writing bad checks.  Probably wasn't from her careless driving charge in 1989, or her traffic citations in 2007, 2009, and 2011.