About the only thing that could make me delay my post about Dear Leader's creepy gun gathering yesterday would be an opportunity to pile on Notre Dame.  So here we go.... 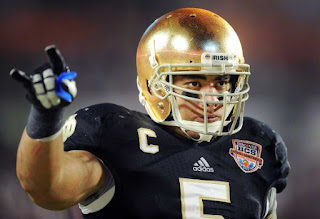 The legend of ManLie really started with reports that his grandmother and his girlfriend had incredibly passed away on the same day last September.  We all marveled at his courage and strength of character as he fought his way through heartbreak and despair to lead Notre Dame past Michigan State just a few days after  suffering such a personal calamity.  Yeah, not so much.

Teo's grandmother did indeed pass away as reported, certainly a difficult thing for anyone to deal with.  The girlfriend, Lennay Kekua, did not die as reported.  In fact, she did not even exist as reported.  On Dec. 26th, Teo informed his coaches that the story of his girlfriend was in fact a hoax perpetrated on him by persons unknown.  He claims the relationship was "online" and over the phone, and that he had been duped into believing that Kekua was a real person.

Here's the bottom line.....there are only 2 possiblities.  The first is that Teo is telling the truth, and was an unwitting victim of an elaborate and cruel hoax.  The second is that Teo is a lying scumbag, willing to do anything to bring attention to himself and his football team.  Maybe it's my cynical side, but I don't believe the first explanation for a minute.  If Teo is telling the truth, then his intellect is on par with, say, an overripe artichoke.  That begs the question....how the hell did he get into Notre Dame?  Haven't we been told all these years how rigorous the admission standards are in South Bend?  Wasn't that one of the excuses put forth by a long string of failed Irish coaches?  If ManLie can't see through the "fake online girlfriend" gag, then how is he going to decipher Peyton Manning's line of scrimmage shenanigans, or unravel the deception of Tom Brady's play action?

Mark my words.....at some point in the not to distant future, Teo will come clean.  He will admit to being complicit in the hoax, and beg forgiveness from the NFL, football fans, and Notre Dame alums.  Never fear though, after all this is only the second biggest lie to come out of the state of Hawaii in recent years.  But I digress......

Read the whole sordid story here at deadspin.
Posted by the Crew at 10:01 AM