Meet the Ravaged Taxpayer of Missouri

The scent lingered in the air,drawing the attention of the beasts.  It was familiar,and tugged at their brainstem, urging them to respond.  A couple more sniffs, and they were sure…….somewhere in the great state of Missouri, someone was trying to return tax money to the taxpayers. 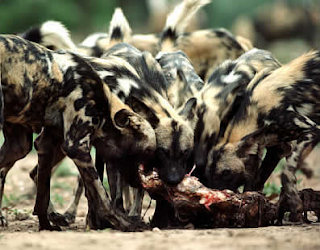 The beasts paused, and lifted their foul snouts from the bloody and torn carcass of the taxpayer.  Slavering and dripping with Other People’s Money, their jaws opened to render a baleful howl…….


“With a price tag of $800 million, this legislation (the proposed tax cut) is an ill-conceived, fiscally irresponsible experiment that would hurt our economy, and jeopardize funding for public services”...........Governor Jay Nixon

“The bill will have a devastating effect on our school district…….we will have to start making cuts immediately that will effect students education.   Corporations will be seeing more profit, and our students will be paying the price”..................Independence (MO) Superintendent Dale Herl

“passing HB 253 hurts education, transportation, mental health and all other priorities we have as a state”      Missouri State Senator Paul Levota (D-11)


Once again, the creatures suckling at the public teat got their way.  After the Missouri General Assembly passed the first income tax rate cut in the state in OVER 100 YEARS, it was promptly vetoed by Democratic Governor Jay Nixon.  The Assembly held their veto session this week, and fell short of overriding Nixon’s veto.


So there ya go….the torrent of OPM that flows from the people to the government goes unstaunched.  Any attempt to do so is met with the predictable and trite laments of how it will ruin the lives of children, cause the elderly to burst into flame, and force ugly chicks to purchase their own birth control.


The great beasts are satisfied now, for the moment.  They lower their loathsome heads, and resume ripping and tearing at the taxpayer’s corpse, consuming every last fiber of meat and gobbet of fat.