The Day the Climate Stood Still 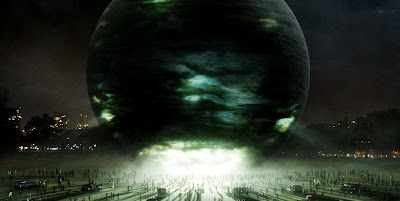 There is a great deal of buzz over an upcoming literary release.  In fact, the excitement level has surpassed even that of 14 year old girls over the publication of the last Twilight book.  Yes, devoted readers, that's right... I am referring to the soon to be New York Times best seller, the Intergovernmental Panel on Climate Change's Fifth Assessment Report, or AR5 to its friends. (Wait, isn't that an assault rifle?)

Don't worry, I won't spoil the cliff-hanger ending for you.  Well, OK.  If you insist.


Regardless of what happens, it's our fault.  Which brings us to a new entry on Sahib's List of Questions Liberals Refuse to Answer:  What is the ultimate goal of the apocalyptic climate change hand-wringers?  I know the answer for the more cynical of us.  Liberals want control AND they want to make money.  How much has Algore made off his "green initiatives"?  But I believe that there are truly people out there that believe the earth's entire polar bear population will soon be stranded on small patches of melting ice.  This seems to upset them.  It is for these people I pose the question:  If I could give you god-like power to do whatever you wished with the earth's climate, what would you do?  Initiate climate stasis?  The earth has been warming and cooling since its creation.  In the timeline of the earth's history, how can you take a sample size of 150 years and extrapolate a trend?  So please tell me, what is the global climate goal?

Which begs another question... Are global coastal populations going into cryogenic stasis for the next 100 or so years?  The big scare that the AGW people like to use is the earth warms, land ice melts, and then sea levels rise thus drowning billions of people.  Worst case scenarios have sea levels rising five feet by 2100.  Apparently, between midnight on December 31, 2099, and 12:01 on January 1, 2100, sea levels are going to instantly jump five feet. (maybe)

Hold on... the crack SACSTW climate staff is informing me that the sea level rise will NOT happen over night.  So I guess people living on the coasts will have to move their deck chairs back 6 inches a year.  Oh, the humanity!

Oh, and anyone curious about the #1 entry on Sahib's List of Questions Liberals Refuse to Answer?  I've posted it before.  The first commenter to post it wins a free copy of AR5.