Ray, It's Time For You To Go 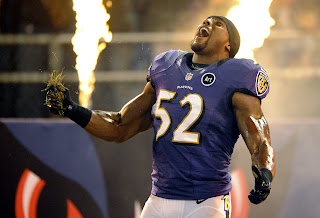 I woke up this morning with a big......smile on my face.  It's not just Super Bowl Sunday, it's the last day of Ray Lewis's NFL career.  I've been watching NFL football for a long time, and never have I despised a player like I do Ray Lewis.

Self-aggrandizement is particularly loathsome to me, and Ray is the master of the craft.  Never again will I have to watch his formulaic, ridiculous, So You Think You Can Dance entrance into the stadium.  Never again will we be subjected to Ray prostrating himself on the field in prayer as soon as enough cameras are pointed in his direction.

Ray Lewis was a great linebacker.  He won't be the best linebacker on the field today, heck he won't be the best linebacker wearing #52 on the field today.  My favorite football memory of Ray came in a game against the Chiefs a few years back.  Chiefs All-World lineman Will Shields was absolutely abusing Ray, and he didn't like it.  Cameras showed him on the sidelines, whining to Brian Billick how the Chiefs were double teaming him on every play.  The video footage showed otherwise....it was just a case of one man (Shields) completely dominating another man (Lewis).  By the way, how Will Shields was not elected to the Hall of Fame yesterday is a complete mystery, but I digress.

For late-comers to Ray's World, let me take you back 13 years.  In January 2000, Ray and a couple of his running buddies were involved in a fight outside an Atlanta nightclub.  Two men were stabbed to death in the brawl, and Ray and his homies were indicted on murder and aggravated assault charges.  Ray would ultimately plead guilty to misdemeanor charges of obstruction in exchange for testifying against his companions.  Might I suggest that if your Wikipedia bio page contains the heading "Murder Trial", you are probably not such a great person.

Did I mention he has 6 children with 4 women?  But I digress.

So farewell Ray.....here's hoping you take the butt-kicking of a lifetime tonight.

PS- There is some more good Ray Lewis stuff (and some adult language) here at deadspin.