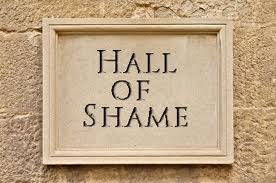 This week's Hollywood Hall of Shame competition was held on Tuesday in Washington DC.  All the competitors gathered at an anti-gun press conference where they took turns competing for our hallowed award.  Amanda Peet, despite rocking the naughty librarian look, was eliminated in the early rounds.  When the dust had settled, Chris Rock and Tony Bennett were left standing as this week's Hollywood HOs finalists.

First up was Chris Rock:

Why thank you Mr. Rock, for your thoughtful input on Constitutional rights and the problem of violent crime in America.  Forgive me if I don't play along with you "Dear Leader Daddy" fantasies, but I do appreciate your great respect for the office of the President, and for all the men who have occupied it.  You know, like George Bush........(adult language ahead)

Not to be outdone, Tony Bennett tottered up to the microphone to talk about gun violence......

"It's the kind of turn that happened to the great country of Germany, when the Nazis came over and created tragic things.  And they had to be told off....and if we continue this kind of violence accepted in our country, the rest of the world is going to really take care of us, in a very bad way."

Gee Tony, I don't even really know where to start.  I'm not quite sure where exactly the Nazis "came over" to Germany from.  I suppose Hitler was actually Austrian, but most of his demented acolytes were home-grown.  You are right that the Nazis "created tragic things".  One of the first was a disarmed citizenry.  Yep, ole Adolf and the boys were firm believers in gun control.  Der Fuhrer might have been the ultimate whack-job, but he knew that tyranny can only be complete when guns are taken away from the citizens.

I love the part in Saving Private Ryan when the Allied forces stormed Omaha Beach....you know, they all ran right up to the Germans and told them off but good!  This might come as a shock to you Tony, but the Nazis were actually defeated by....wait for it......good guys with guns!!

When the votes were counted, Tony Bennett had won this week's Hollywood HOs award.  His achievements in revisionist history and nation-threatening were just too good to overlook.  Better luck next time Chris!