Cecil the Lion Was A Democrat! Cecil the lion was a Democrat, and it killed him.  More precisely, male African lions are the Occupy Wall Street types of the animal kingdom.  They lay around most of the day drawing crowds of gawkers, but never really contributing anything to the advancement of the species other than a little sperm.  OK, a lot of sperm...but I digress.

Regal in appearance but indolent at heart, male lions would prefer to lounge around the Serengeti than get up off their ass and run down a wildebeest.  Remind you of anyone?


Like the Occupy crowd, male lions sponge off the work of others, in their case female lions.  Lionesses do the majority of the hunting for a pride of lions, then defer to the male who eats first from the kill.  Hang on....Mrs. Crew is telling me dinner is ready.

Ok, I'm back.   Why the treatise on lion behavior you ask?  Unless you have just teleported on to this rock from the third ring of Saturn, you have heard about Cecil the lion.  By the way...it is "ses-uhl", not "see-suhl".  Cecil was evidently the most beloved and well known lion in his home country of Zimbabwe, living a life of leisure and torpidity on a local game preserve.

Enter Walter Palmer, DDS.  Palmer, a Minnesota dentist, paid $55,000 for a lion hunt in early July that resulted in Cecil getting whacked.  Most reports indicate that the professional hunter hired by Palmer and one other coaxed Cecil off the game preserve by dragging a dead animal behind a vehicle as a lure.  Palmer then shot Cecil with a bow, wounding him.  The hunting party tracked Cecil for 40 hours before he was ultimately dispatched with a gunshot from the professional hunter.

When news of  Cecil's demise leaked out, the world exploded.  Twitter feeds were choked with angry animal lovers, many calling for the death of Dr. Palmer. Jimmy Kimmel broke down on national TV. Facebook timelines filled up with pictures of Cecil, celebrities stopped pimping the Iran deal and started caterwauling about "Justice for Cecil". Dr. Palmer's dental practice was shuttered, and he has gone into hiding.  Trespassers (some call them protestors) have spent the week littering Dr. Palmer's property with death threats and memorials to Cecil.  These two moonbats dressed as lions going on a "dentist hunt".... 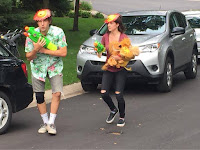 On a side note, I wonder how the cows whose skins cover the car seats of these two idiots feel?  Seriously, cows have got to get a better marketing department.  But I digress, again...

With apologies to Edgar Wallace, twas liberalism that killed the beast.  Had Cecil been a rock-ribbed, self sufficient conservative apex predator (like say, Sahib and the Crew), he would have been out working hard to support his family when the nefarious Dr. Palmer came calling.  Instead, liberalism had taught him dependency, and he fell victim to the siren song of an easy meal.

We can learn a lot from Cecil's unfortunate demise...

P.S.- the Senator is the one with only one banana

Millions upon millions of ethical hunters do more for the conservation of game species in one day than all the stuffed animal memorials and "dentist hunts" will ever do.  That said, if Dr. Palmer and the others involved violated the game laws of Zimbabwe (and it appears they did), they should be prosecuted to the fullest extent of the law.  But please, let's not make this out to be the crime of the century.


After all, it's not like Dr. Palmer was out there chopping up babies into little salable bits.